MassDiGI’s Tim Loew comments on Zynga and the resiliency of the game industry.

“I am proud to have partnered with President Johnson [chair of the MassDiGI Advisory Board] and the Becker College community to advance opportunities for students pursuing careers in the state’s growing digital and video game industry,” said Lt. Gov. Murray.  “Video games are a growing industry, and MassDiGI is dedicated to helping students improve their talent and help Massachusetts stay competitive in the increasingly global marketplace of the 21st Century.” 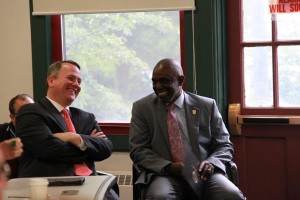 PAX East 2013 may be over but you can still read/watch all about through the selected links below – all of which feature comments from MassDiGI.

MassDiGI is pleased to announce the 2013 Game Challenge winners! Below are links to various media stories as well as the official press release.

Some 250 “indie” game developers and students from across New England

“MassDiGI did an amazing job organizing the event and bringing so many great developers, mentors, and speakers together. The feedback and experience I got during the Game Challenge was extremely valuable, and I’d recommend it to anyone who is making a game and wants it to succeed,” said Erik Asmussen of 82 Apps. “The Game Challenge was a perfect way to develop and sharpen a game pitch, which is critical for any kind of outreach efforts.”

The Game Challenge, a pitch contest, helps indie and student game development entrepreneurs hone their ideas and products for launch. Forty-four teams consisting of indie game developers and student teams from around New England competed in a sold-out event from March 1-2 at the Microsoft New England Research and Development Center showcasing the rapidly expanding game industry cluster in the region. A panel of videogame industry veterans served as judges for the competition.

“The MassDiGI Game Challenge is unlike any other competition held in Massachusetts and the wider game industry as a whole,” said Elliott Mitchell, Game Challenge mentor and founder of Vermont Digital Arts. “It has been thrilling to see and meet with all of the teams, many of which have presented truly groundbreaking ideas showcasing the strength of the game development community around Boston.”

“Our first Game Challenge in 2012 was a big success, but 2013 has really blown last year’s event out of the water – in more ways than one,” said Monty Sharma, MassDiGI’s managing director.  “With over 40 passionate, creative teams competing this year and over 30 VIP mentors and speakers participating, along with a stellar line-up of game industry judges, the 2013 Game Challenge exceeded our expectations. The talent we have seen in this competition promises a bright future for game development in the region!”

The Overdriver.com Best Online Game Runner-up was a serious game by Zeebi Lab, a team from Harvard Medical School.

“It’s an exciting time to be a game developer,” said Timothy Loew, executive director of MassDiGI, “And the Game Challenge shines a spotlight on that excitement.”

By entering, all Game Challenge game concepts are also eligible for the 2013 MassDiGI Summer Innovation Program, a $20,000 value, to help develop their game for launch.

Students entering their second year of college looking to break into the interactive entertainment industry are welcome to apply for the 2013 MassDiGI Summer Innovation Program. Accepted applicants will work full-time alongside a team of students under the guidance of industry mentors over 11 weeks on the campus of Becker College in Worcester, Mass. Students accepted into the program will receive free housing over the summer, as well as a stipend. To apply, visit www.MassDiGI.org. The deadline for applications is April 5.

A game developed by UMass Medical School, the Massachusetts Digital Games Institute and Becker College was voted Best in Show at the Serious Games and Virtual Environments Showcase at the 2013 SSIH International Meeting for Simulation in Healthcare in Orlando, Fla.

The Hive at Boston.com: With a Little Help from My Friends – A Day in the life of a Game Developer

“The game development community here in Massachusetts has really taken off in recent years, with new studios popping up everywhere. I’m fortunate enough to be the co-founder The Tap Lab, and I wanted to share what daily life was like in the industry.” Read the full story on the MassDiGI Blog on The Hive at Boston.com here.

The Hive at Boston.com: I was a Teenage Congressman

How do you inspire a new generation of  Capitol Hill dealmakers while educating youth about the political process? Through video games, of course. Chris Parsons of Muzzy Lane Software explains how they took a tough subject and made it engaging. The full post can be found here on The Hive at Boston.com and comes courtesy of MassDiGI.