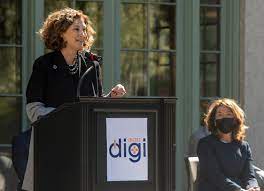 Among all those kind words President Leshin made the first big announcement that MassDigi would be moving to WPI over this upcoming summer – exciting news! After a fantastic run at Becker, we’re thrilled to be joining WPI. We’ve had a great relationship with WPI since MassDigi was established a decade ago – folks from WPI have been with us since day one – and count ourselves lucky to have found our new home just across Highland Street.