Being a student of game design and being a game designer are two radically different things. In the classroom, time is spent explaining the terms and ways of the industry, explaining the successes and analyzing the failures. Sometimes, in one class of a term, students get to try their hand at making an actual game, but it’s usually only brought into the prototype stage when the class ends. Work on it is done at random hours, whenever the students can find time between meetings and other class assignments. The rough husk that’s made by then is either brushed up a bit for a portfolio piece or forgotten, and the student group breaks up and moves on.

Actually making a game, a full game with intent to sell, is a whole different challenge. Do you have the required budget? Is the scope reasonable compared to your resources and allotted time to work? Is there a market for the game? If so, who is it? How much will they pay? These questions are either briefly touched upon or ignored in the classroom setting; after all, no one expects a profitable game to come out of such an environment. They are very real questions that game designers have to answer (that is, if they want to eat). On top of that, in a work environment of making games, there’s no other work interfering with the game creation process. Your job is to make the game and get it out to players, not write a ten-page essay on Paradise Lost and do a biology lab while maybe getting some coding done on the side. 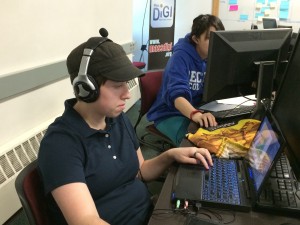 The first two weeks of MassDiGI’s 2014 Summer Innovation Program were the first time a group of students, including me, from colleges across the northeast got a taste of what being a working game designer is really like.

The goal of the program is to create then launch a product, and the student interns are given all the tools to succeed in a space where it’s okay to fail. We are tasked with making a game that will get an audience and, hopefully, a profit, and work eight hour weekdays with no other obligations. The space operates as a small studio, where the we have to openly keep track of tasks, create builds to show higher-ups, and work towards having a finished product by the end of the eleven-week program.

To help us learn and create better games, industry professionals come in once a week to talk about a section of the game-creating pipeline and offer advice to the us about their own games.

The program is currently beginning it’s third week, the first week being orientation. During that orientation, the staff explained the development pipeline to us, and showed us how to work out well-scoped ideas with a discernible market. We came up with a number of different ideas for games to make for the program, and voted on four games from that pool to work on. The first week of work had us jump right into creating, with a demo build deadline at the end of the week. During that week, four teams of students who had only meet the previous week and had only a brief design to start with created four working demo builds and full documents outlining the plans for the finished games and our target markets.

As one of the interns in the program, the experience has been great. Making games in the classroom is one thing, but making them for players, real paying people, is different, exciting, and nerve-wracking, all at once. Speaking with people in the industry about your game and having them give you great advice back, putting your demo in front of a player and watching them completely break it, making a quick draft of the art and having people respond exactly as you had intended, and everything else I’ve been through these past weeks has been this exhilarating roller coaster that makes me certain of my love for creating games in a way that learning definitions and working in hypotheticals never could.

And the best part is, it’s only just begun.