Audio magic: The sounds of summer

What is it like to be on 4 teams at once?

Before the summer started and I found out I was going to be the only audio engineer for 4 teams I was scared to death. I asked myself, “What if they don’t like my music,”  “What if I’m not able to produce assets quickly?” and so on. They were “What if’s….” and would only hold me back so I had to rid myself of that thinking if I wanted to make the most out of this summer. 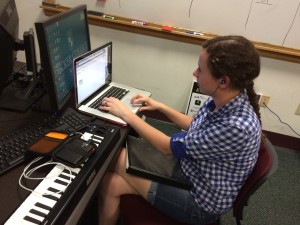 op of this, I was thrown (willingly) into a 5th team for another game being developed for the local Worcester baseball team. Plot twist, right?

In actuality, being on five teams working as the audio engineer is an immense amount of fun and I wouldn’t trade it for any other summer experience. Each team is vastly different, having various ways of handling me, how they give criticism, and vary in the ways they function behind the scenes. Although I don’t see each team everyday, I’m able to get a glimpse of how they work together and that in itself is hilarious. I get to see the inner workings from a successful build, to a bug in the code, to gossip.

But how do I keep my sanity? Well, I’ve found a way… I think.

Organization is key. With 5 games, each requires its own set of music and sound effects. This means that I have a ton of folders and files on my computer that are easy to lose track of. Gotta stay organized!

We’ve been told a hundred times this is a “people-person” industry, and if you aren’t good with people, good luck! Working with 23 other people means 23 distinct personalities with 23 different life experiences. Sometimes patience and understanding are super beneficial!

It’s easy to get sidetracked and overwhelmed. It’s also easy to bash your own work – especially if the others think that it’s not perfect for their game or what they want. You just have to say, “It’s a bad track/sound effect. Let’s move on.” Doing so helps me in the long run as the next iteration or redo turns out better than the last one.

To see and hear our work in action, sign up to playtest our games here.