Perspective is a huge part of game development that many developers never speak enough of. Experienced industry veterans always harp on playtesting for the sake of learning the player behavior, studying how they play, and what decisions encourage them to spend money or continue playing. However, playtesting can give you honest feedback on how to operate in your own team and which tasks you should take. Receiving feedback is crucial in the way of ensuring which tasks get pushed to a higher priority to ensure you are on route to finishing your game.

My role on the endless runner project, Hyper Thunder Run: 198X, is a mash of 3D art and UI/UX. As our game is difficult to balance for polycount and optimization, I’ve had times where I’d have large tasks set aside just to tackle large goals such as “creating consistent fake lighting”, “rebalance spacing between when the skyscrapers respawn”, or “reduce all textures to less than 512 px” in the entire project. Unlike my time spent in academia, I finally understand the point of stepping away from a project to gain perspective. 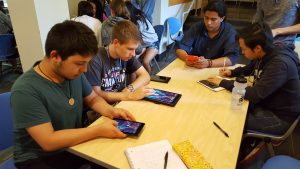 Juggling two vastly different art roles, I needed to learn how to step back and worry less about the nitty gritty on a project. When I was worried about the framerate being a “future problem”, I was neglecting my UI/UX tasks, believing that they were a lesser priority. When several summer camps of students stopped by this past Tuesday, their brutal honesty on the neglect in the UI was an eye-opening experience that helped me realize how much of a higher priority task they were. Almost immediately after the event, I walked up to the Kanban board for my team and created a series of tasks to develop several menus for the game. The screen flow was already created and defined nearly a month ago but, since then, I was swamped with 3D tasks that I only made small, minute tasks for UI. With those two art positions in juxtaposition to each other, I’ve started to learn the fine balance between the two while working in an indie setting.

With only about three more weeks of SIP, I’m happy that I finally started to balance multiple roles in a team. The situation I faced can apply to almost every individual in the Summer Innovation Program: stepping back can provide the insight needed to learn what you truly need to work on in your game.