Breaking in, breaking out

When our core team of five was first assembled, I thought we were doomed. Out of the four MaSIP teams this year, we had the fewest members and none of us had interacted with each other outside of work hours. We struggled for the first two days as we adjusted to each other’s work styles, and we were lagging behind the other teams in the demo phase. Now, just a month after we all met for the first time, we’ve learned to rely on each other to build Slime Break, our endless side-scrolling version of BreakOut. 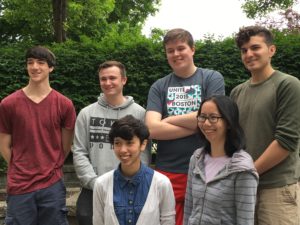 Marc McCrevan from Becker College is our lead artist and the most relaxed member of the team. He puts all of his heart into painting the game’s backgrounds, and even after scrapping 4 entirely different versions of parallaxing sceneries, he still has the energy to laugh whenever something goes wrong. “J” Tuason from Rochester Institute of Technology is our “dad” of the team, and tackles programming and art tasks while being our lead designer. J is never afraid to tell us when we’re straying outside of the intended scope or if a feature seems unnecessary, which has proven to be an invaluable strength on our team. They also make the best food, but the rest of us aren’t even competing. Andrew Barrett from Northeastern University is one of our programmers, and when he isn’t singing, dancing or making jokes to cheer us up, he’s picking out game bugs and gathering crowds to playtest the game. Liam Doherty comes all the way from Letterkenny Institute of Technology in Ireland and is our lead programmer. While he’s usually a silent worker, his playful personality shines through on his (rare) breaks. Joe Marchuk is everyone’s music man from Berklee College of Music, and we’re so thankful to have him as he puts up with all of our conflicting tastes in music. As for myself, I’m Sam from Smith College and I’m the team’s producer and final artist. I check on everyone else’s progress on the team while producing sprites, doing research, and keeping our social media up to date, which happen to be my favorite parts about making games!

Our team and game have gone through a few iterations ever since we settled on Slime Break’s direction four weeks ago. The game is currently an endless version of BreakOut, the classic brick-breaker arcade game, but with a fantasy-inspired art style and some cute slime creatures transformed into balls. The player controls a paddle that redirects the slime character (the ball) into oncoming bricks that scroll across the screen. As the slime character breaks bricks, the background changes to different phases which increase the game’s difficulty and different types of bricks are encountered in the various environments. The goal of our game is to get high scores and unlock new ways to play once your lifetime accumulation of points reaches certain thresholds. (Our initial pitch was a Portal-meets-BreakOut game; we’re all glad we ditched that early!)

The past two weeks in particular had been rough on us as we struggled with our biggest obstacle: BreakOut is already a well-established and fun game, but how do we make Slime Break stand out? We want to take advantage of our horizontal orientation and our unique characters, but it’s hard to come up with a new core mechanic. As we’ve gotten better about perfecting gameplay and nailing down an art style, it’s become more apparent that we need something special about our game to make it more than just a BreakOut clone. Our biggest day of feedback was last Thursday, when we visited several studios in Boston and then had a fantastic time at Boston TechJam. We first went to FableVision Studios, who applauded our story and encouraged us to pursue it. Next was Proletariat Inc., and the veterans prompted us to look into social integration so we could start thinking of ways to make the game a more social experience rather than as a single-player time-killer. Our harshest but most honest critique came from the incredibly experienced game developer Craig Alexander when we were visiting MassTech. He immediately challenged us to consider: “Why should I play your game? There’s a million other BreakOut games just like this one. The art isn’t enough.” Our art team (which also doubles as our design team) had been so focused on making our art style unique that we had overlooked making the gameplay distinct. 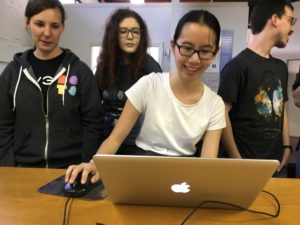 With this feedback in mind, we made some necessary changes to the scope of our gameplay. We cut out the different classes of characters that would have been unlockable ingame as different ball types and we are no longer working on a guild system, which would have worked as an ingame shop. With these endearing but distracting features removed, we now have time to further develop the core mechanics of our game and figure out a way to make it a “breakout” of its hybrid genre. Players (and the team) are attached to the cute slime characters, but the ball doesn’t do anything special yet. We’re currently trying to decide whether we should give the ball a slime-related ability or if we should improve the gameplay to give it better escalation and crazier payoffs, like ultra combos and unique drops. We’re leaning towards testing the second kind, since it sounds like more fun for players anyways.

As we brainstorm ways to implement these, we’ve realized our biggest challenge overall has been juggling “making this game fun” and “making this game work.” Now that we’ve finished making the basics of our game, we need to push it to an extreme so players aren’t bored with our working but predictable gameplay. We can finally focus on pushing the limits of our format and inspiring our players to keep coming back with timed reward systems and cute slime characters.

If you’re interested in seeing more of our slimes and our game, consider following our twitter and facebook! We love hearing feedback and interacting with other game developers, either online or at conventions. We just came back from Playcrafting Boston, and we’re planning on going to MassiveCon this weekend. We look forward to making this game the best we can, and we hope players enjoy playing it as much as we have enjoyed making it!