The goal of SIP, MassDiGI’s Summer Innovation Program, is to make a game, from start to finish, over the course of a summer. From the beginning this made me nervous. I’ve been conditioned to make projects small and downsizable into even smaller parts, and everything about the program sounded worryingly large in scale. Sitting comfortably at the other end of the summer, I’ve seen that things turned out fine, but there were a couple extra challenges SIP had that I hadn’t even thought to worry about until they had passed. 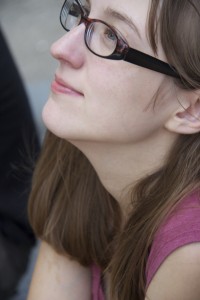 SIP operates by partnering local professionals that have ideas for games with undergraduate and graduate students studying game development. In the first week, they pitched us their ideas for games, and we divided up into teams among the projects. The game I’m working on goes by the code name “Robot Orphan Workforce,” which our team is working on under the mentorship of Ziba Scott from Popcannibal. It’s a construction simulator where orphaned robots build houses and famous monuments out of blocks. When we were shown Ziba’s prototype and given his pitch, though, that wasn’t initially clear to us.

Some other SIP projects had a single, clear path to becoming a finished game, but our game was more wide open. The prototype we saw had little shapes building larger buildings out of blocks, with the rest of the features and characterization left for us to decide. Because of this, all of us came to the table deeply excited about very different games that could not all be made, and picking a direction was a huge challenge.

What we could plausibly do with our game depended a lot on how much we expected to be able to get done with our group over the summer. The trick was we didn’t know each other. We’re all students, and intimately aware of what happens to group projects with even just one or two unmotivated, unskilled or uncooperative members. We didn’t know each other’s strengths or whether we’d be able to count on our whole team, so it was hard to say how much work we could manage.

The sneakiest problem, though, was that we had no idea what a summer was. As students, our whole lives have been punctuated by summer breaks, so you might expect that we’d know how long a summer was. Really, though, we had no clear picture of how much five people working full time could do over a summer cycle. Projects have, for us, always been done in semesters or shorter bursts of crunch time, competing with other academic, extracurricular and social commitments. We had no frame of reference for planning out a dedicated summer project difficult.

Still, we had to make decisions, and the first decision our team really made is symbolic of how we’ve dealt with these issues. We decided to make the builders robots that we designed modularly, with randomly assigned hands, feet, hats and clothes. It let us build as many art assets as we wanted to decorate them, while keeping it a non-tragedy when something we had made for them had to be cut.

Our game has gone through a lot of cuts gameplay-wise as well. We wanted players to be able to design their own buildings, but had to face the reality that we couldn’t make that a good experience and have the rest of our game still be fun in the time we had. Physics were going to play a major role at first. Orphans were going to be sorted into teams, which would be used to upgrade their stats, some were going to roll around on wheels, while others floated on rocket boosters. These things won’t make it into the game, and some were very hard to give up on, but by cutting them, we’ve made room for things like shooting rockets of oil to keep the orphans from getting rusty and hugging your orphans with rainbows.

More importantly than that, maybe, is that by cutting those features, we made our game completable. We now have an almost-finished game to match the almost-finished summer. We know what our game is now, and we know what each of us does well. We know now that our team was dedicated and skilled enough to pull off quite a lot. And now we know how long a summer is, though I wish it was a little longer so I could spend more time with my team and our game.