Two weeks ago the folks who run SIP–Tim, Monty, and Walt–said that in two weeks we would be part of a team with working prototypes of our games. I didn’t think it could be done, and yet here we are, two weeks later, with a game, playtesters, and convention meetups. But it hasn’t all been fun and games–we’ve been learning some important lessons in getting to where we are today: 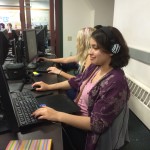 Be Ready For Change – For our team’s game, Crafting Life, we are working with researchers to use our game as an alternative to drug treatments. This means that we have to be on the lookout to see how we can change our game to suit the needs of the players, creating a game that is both fun and functional. We have to be careful not to become too attached to any one idea or style because a different path might end up being the better one to take.

Ask Around – We’ve been told that at all times we should be either working, teaching, or learning—and I’ve discovered that I have a lot to learn from my team. From just making sure that we are all on the same page to learning the ins and outs of certain programs, we have worked together learn all that we need to know about getting our game to work and all potential forms that our game could take.

Know Your Story – When Bill Gardner, a local developer at The Deep End Games, came to speak with us about our game, he said that while he liked it he couldn’t quite see a unified direction. It was then that we realized that we didn’t really have a direction—while we had a solid game, there wasn’t a story or experience we wanted to invoke. With his advice in hand we went to look at what we wanted to say and how our game could say it.

In short, my team and I have learned a lot over the last two weeks, and we’re certainly hoping to learn more both from each other and from experts in the field. What matters is that we’re continually pushing ahead, working together, and finding our way in order to make something great.