Crowd vs. community: Lessons learned from the people

When it comes to any competitive industry, we’ve all asked ourselves at one point or another:

“Are these people, who all do the same thing as me, here to help or hinder me?”

The answer to this question is the difference between a gradual clambering over an intimidating crowd to be heard, and a supportive community that achieves results by sharing its knowledge among all its members. To be fair, it’s always a bit of both, but usually you can feel if there is an imbalance one way or another. After spending much time with the Worcester and Boston gaming communities, meeting people, seeing studios, going to events, and generally getting involved in the Massachusetts game development scene this summer, I was overjoyed to find it an extremely genuine community. 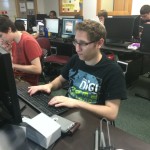 The demo night at both Playcrafting Boston and Woo! GamePile really set the feeling of a community into stone for me. Before I walked into the first showcase I had the mistaken impression that everyone in the world was trying to create the exact same game/genre/idea/product…etc. and thus all the other people demoing would be showing cleverly dressed up versions of our game. However, needless to say I was grossly mistaken and everyone had their own wonderfully original ideas and were pursuing them in really interesting ways. It was then I realized the truth of variety and niche. Seeing all the developers at the local gaming showcase / demo events made me understand everyone was trying to do their own thing, and there was hardly competition in the fact that we all made games. Each of us trying to hit different markets, demographics, and platforms. Our audiences were completely different, our games were completely different. It really solidified for me that there really is a place for that new idea or unique concept out there in the grand scheme of the gaming world (assuming you can find a way to monetize or popularize).

Furthermore, people wanted to help us succeed and tried to give the most helpful feedback they could muster. Usually saying something along the lines of “I ran into a similar problem doing that, try this…” or “The game is fun here and here, but I lose the momentum when I attempt to do this.” All were eager to give advice, from game to engine, even when our markets intersected or genres overlapped. The people we met embodied the sense of collaboration we’ve heard about time and again when listening to lectures on the industry, but for the first time I was getting a clear look at face to face. Similarly with the four teams of the MassDiGI Summer Innovation Program, an arrangement seemingly perfect for breeding an aggressive competition between teams, miraculously motivates extreme collaboration! This is what the games industry is all about.

As someone who has aspired to make waves in the gaming industry from a young age, my outlook has gone through several formative stages.  The most recent of these stages has been thanks to my experiences at MassDiGI’s Summer Innovation Program. In each of these stages I’ve tried to size up the games business and where I stand in relation to it. Today it feels less like a harsh industry and more like the group of kindred spirits I once imagined it to be.