Midnight Terrors, a free, fun and challenging tower defense game released today on the App Store and Google Play, came from the imagination of Joe Lajoie in May 2014. At that time, Joe, a Becker College student (now alumnus), was an intern in our annual MassDiGI Summer Innovation Program (SIP). After successfully pitching his idea about a boy named Casey and his toys to the rest of SIP, he along with talented students Renzo Heredia from Berklee, Loren Sherman from MIT, Ning Xie from Mt. Holyoke, Benji Smith from Northeastern and Aromie Kim from Tufts teamed up to make the game a reality. 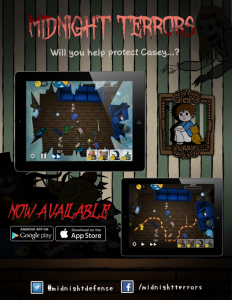 Working together over that summer, the team, using Unity, produced a high-quality game (watch the terrific trailer here) which, during a demo at Boston TechJam, caught the attention of New York City-based game publisher Thumbspire. From there, partnering with Thumbspire, we brought Midnight Terrors into our LiveCode Studio program at Becker during the 14/15 academic year. Through LiveCode, many more students from Becker as well as RISD, Hampshire and WPI had roles in the further development of the game, winning awards and polishing it to the point where it was tested in international markets.

This fall, the 15/16 LiveCode launch team, a group of students from across a range disciplines, put the final touches on Midnight Terrors and it is now available to download for iOS and Android.

It has been a busy semester for the launch team which pushed out Limbs (Google Play, App Store), another SIP14 and LiveCode 14/15 & 15/16 title, in October and, working with Thumbspire, has Hibachi Hero, a SIP15 and LiveCode 15/16 title, slated to hit the stores on December 17.