Coming straight from the end of finals at our respective schools, the students selected as interns in MassDiGI’s Summer Innovation Program (SIP) found themselves settling into the facilities at Becker College. Step by step we started getting ready for three months of dedicated entrepreneurship and game production.

For the first week of SIP17 we spent time getting oriented. MassDiGI managing director Monty Sharma introduced us to the  program. Along with help from executive director Tim Loew and producer Walt Yarbrough, he covered each aspect of the program and made sure all of us knew our responsibilities. During orientation we all got to know each other throughout various group tasks. We got accustomed to the surroundings and even had some “off-site” team building exercises, such as board game evenings and group meals. 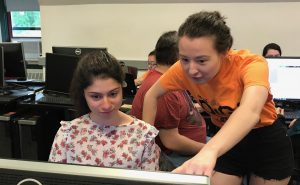 At the beginning of the second week we game jammed to build a simple AR application. This was simultaneously an interesting and challenging task that facilitated the transition to the actual start of the work. Then on that Tuesday,  the 28 of us were split into five teams (ed. note – more on the 5 teams coming soon) to begin their development process. Each team had a combination of artists, designers and programmers, along with one lovely music producer, Lisa Jeong from Berklee College of Music.

Once the five teams were formed, we started discussing, conceptualizing and designing a fun core mechanic to build off of. To make sure the starting point was engaging and entertaining each team presented their game idea to the producers. The feedback we received was crucial to our further progress.

After exploring the core mechanics chosen, each team began building a demo version of their game. All teams were working hard towards their common goal – to present their core game ideas to each other, SIP mentors and visitors. Meanwhile, each team’s artists began working on conceptualizing ideas to suit the specific mechanic the team had begun to build. 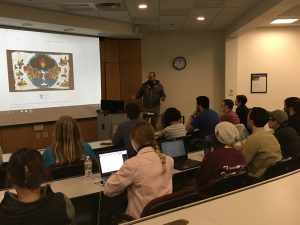 We also had our first industry mentor come by the studio, Forrest Dowling from The Molasses Flood of The Flame in the Flood fame – and a former designer on Bioshock Infinite. The questions asked during his talk helped the teams to better understand early stage game development. After the talk Dowling tested each team’s demo game and provided his feedback. He emphasized the importance of the presence of a clear idea where a game is going. His suggestions on how the games should progress were particularly useful for us to shape our short and long term goals.

While each team is progressing at a different pace, our end goals all converged when demoing of what we’ve built so far. And, while we’ve all got a long way to go before we have a finished product, we are really excited to see what we’ve created so far and how we’ll progress into the future!