By Emily A. Ramirez ’19, Massachusetts Institute of Technology

Monty Sharma, our boss, picked up the iPad and gazed down at the screen through his glasses. He hit “Start,” dragged his finger across the screen, evaded the walls like a true Snake expert, and scored a thousand points before dying. There were maybe forty seconds total of gameplay, silent save for the game’s placeholder music. He politely grimaced and said, “It’s alright.” He then held up a hand to his chin and looked at us. “Guys, I want to play the best snake game of all time. You guys need to get at the root of it: what makes a good snake game?” We slunk back to our computers, wondering how we could amount to the task we’ve just been given. 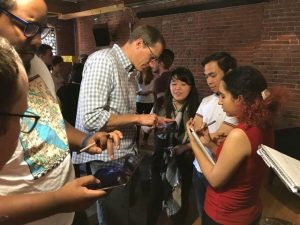 Receiving feedback on our game from Connelly Partners advertising agency.

This was maybe the start of June. Three weeks later, we’ve finally moved on from our pre-production days. Now when we playtest our game, one of our testers’ first comments is usually, “this is really fluid and fun!” But it took us countless iterations to get there. At our first public playtest, we had three very different versions of Snake—a classic grid-based version, a slither.io version, and a wild 3D version. Kids hate classic Snake; adults hate slither.io controls; everyone was overwhelmed in 3D. Nobody agreed on anything except that our game didn’t have “enough” to do.

Tung Than Vu (Becker College ‘19), a fellow designer and I had endless conversations about what we could add to our game while our producer, Emmanuel Mallea (Becker College ’18), thought we needed to make our core more fun. With the tug-of-war between focusing on what we have and what we could have, Tung and I had to learn to work on both the core and our twist to snake, or ‘Plus One.’  If people were getting bored playing our game, we had to figure out a design that would keep them engaged, and a ‘Plus One’ seemed like the obvious answer. Making the core fun seemed manageable enough. 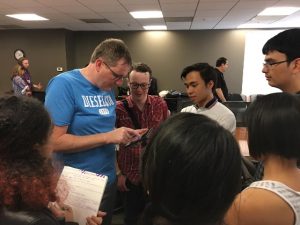 John Conaghan, lecturer at Letterkenny Institute of Technology, playtests our game at a MassDiGI Advisory Board Meeting.

Well, it turns out making “simple” into something fun is one of the hardest challenges of all. It’s not that something simple is too little to be fun—it’s just that if we can’t nail that one vital thing, a fun snake game, players have no choice but to notice we’ve failed as designers. If we get our core right, adding more details to our game is infinitely easier, since our players are already having fun. A simple game means a more accessible game. A simple game is a great game, and as a person training to break down the world’s most complicated problems, I had to learn what simple even meant.

Meanwhile, Tung and I conceptualized several Plus One designs, none of them truly “simple.” There were morality systems, randomly generated areas, changing colors, and puzzle systems. Embracing simplicity wasn’t immediate for me, especially as a lover of complex systems. Days after I designed a “simple” morality system (inspired by Undertale and The Witcher no less!), I finally realized why my mentors preached simplicity. Our designs were way out of scale and didn’t revolve around our core. Our Plus One shouldn’t just be about adding something interesting; it should also be about augmenting the heart of our game. If we couldn’t keep players entertained with the base gameplay, what’s the point of all those add-ons? If our design layers weren’t complementing our base, why did we bother with our base in the first place? If we can manage to keep it simple and build everything around our core loop, we will be adding petals around our rosebud. There is beauty in simplicity, and I am ready to embrace it.