I’ve been told time and time again that majoring in game design is worthless next to hands-on experience for getting into the industry. Before this summer, I felt unable to do anything hands-on without taking more classes; yet MassDiGI’s Summer Innovation Program (SIP) presented an opportunity for real work just after my freshman year, and the chance to create a game with the intention of selling it. Nothing has been more eye-opening for me.

Like many people who dream of making games, I started by playing them for years without any understanding of how they were actually made. SIP brought us to the process by turning 21 college students into a miniature game development company. We work in a habitat not unlike that of most indie companies: a brightly-lit, white-walled computer lab with uncomfortable swivel chairs, a scanner, and a printer. Each computer has the full Adobe Creative Suite and Autodesk Suite as well as Unity, GameMaker Pro, and various programming environments. Each team has its own row of computers and its own slice of whiteboard. 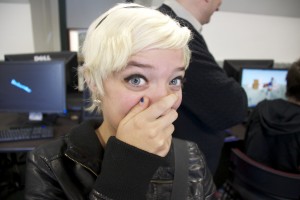 Video games are the most multi of all multimedia, and as a result require extensive collaboration. Unlike movies, there is no one director – even for a very small production, there must be an art director, a lead programmer, a manager, and a designer that holds it all together, and every person has to be on the same page. In our five-member teams some people take on multiple roles. While most people call themselves either “artist” or “programmer,” everybody makes gameplay decisions, provides input on the art, and gives quality assurance (QA) feedback for their own team as well as the other three.

Since we are using a modified Agile production method, we post updated burndown charts on the board every morning and review our completed tasks in a scrum meeting every evening. We push new builds at least once a week and send them out to everybody for testing. The advantage of Unity is that it transfers easily between iOS and computer builds, and three of the teams, including mine, optimize for both platforms.

I haven’t gotten the chance to flex my writing muscles every much, since games with more elaborate stories and casts of characters are much beyond the scope of a six week development period (the last six are for post-development, so no new content can be added). I do feel my writing is better than my 2D art, and I enjoy writing more; yet being able to do both proficiently only means I can offer more to a workplace.

It took about a week not only to get settled in but to realize that this is an amazing job and to cement the fact that I’d like to do similar things for the rest of my life. I am getting paid to make art every day – something that I normally pay others to do in a classroom – and my work is going to be viewed and enjoyed by (theoretically) hundreds of people across the country.

My group is referred to affectionately as Team Wobbles, and we are sometimes also called the Nimbii, for Play Nimbus, the independent game dev group (also found on Facebook) that our fearless leader Nick Mudry formed in 2012. He’s our manager/scrum master and is in charge of social media. We also have Adam Roy, our star programmer, Mike Flood, our level designer, and Laura Gagnon, our lead artist and UI designer, all of whom were part of the team when Wobbles won MassDiGI’s Game Challenge in March 2013. I joined up in May 2013 for SIP, doing 2D art. I’ve worked on tilesets, environments and backgrounds, decorative assets, and some concept art.

The game is a puzzle platformer. You play a god-like figure responsible for a race of creatures called Wobbles that have little bodies, big noses, and enormous dreams. You guide them safely across stages and into the future using strategically placed gadgets, and their tech advances as time goes on: Cavemen start with fire that makes them jump, then in the Roman era, they discover an item that helps them land more safely, and on and on.

More information will be revealed in coming weeks. The first official release of Wobbles is in the beginning of August, when the program ends, though we can stick around even after SIP and make more content if the game takes off!

A version of this blog first appeared at http://rroberie.wordpress.com/.