Colosseum Coach: The fight is on 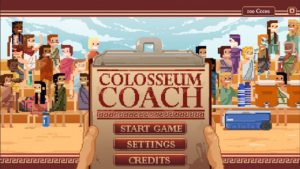 Colosseum Coach, a free, fun, action strategy game where you control a team of gladiators and lead them to victory against the arena’s monstrosities is now available for download on the Apple App Store and Google Play. The mobile game was created during the 2016 MassDiGI Summer Innovation Program (SIP) by students Grace Barrett-Snyder from Smith College, PJ Keenan and Athony Popp from Becker, Catherine Litvatis from RPI, Sofia Miren Syjuco from Carnegie Mellon, Mariel Rodriguez from RISD and Joe Marchuk from Berklee College of Music.

Working over the summer, the team produced a beta/near-release version of the game – watch the trailer here. From there, we brought the game into our LiveStudio program at Becker during the fall ’16 and spring ’17 semesters. Through LiveStudio, more students across a range of disciplines had roles in polishing the game and getting it ready to launch. For a roster of all the contributors to the game, check out the credit roll. Colosseum Coach was launched at PAX East. You can download Colosseum Coach today for iOS and Android.