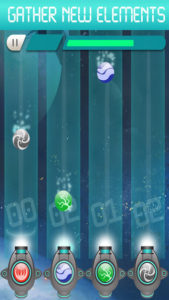 Fusion Galaxy, a free, fun game which challenges players to gather elements through fast-paced sorting and craft new things is now available to download on both the App Store and Google Play. The game, originally titled Crafting Life, was created during the 2015 MassDiGI Summer Innovation Program (SIP) by students Devi Acharya from Brandeis, Ari Green from MIT, Shannon Mitchell from Champlain, Joseph Gillen from LYIT, Isaiah Mann from Hampshire, Matteo Lanteri from Becker and Alex (Ripple) Parrish from Berklee.

Working over that summer, the team, using Unity, produced a solid game – watch the trailer here.  From there, we brought the game into our LiveStudio program at Becker during the 15/16 academic year. Through LiveCode, more students across a range of disciplines had roles in the further development of the game and getting it ready to launch.

Then, over the course of this summer, a team made up of past students from SIP, LiveStudio and other efforts put the final touches on the game and it is now available to download for iOS and Android.