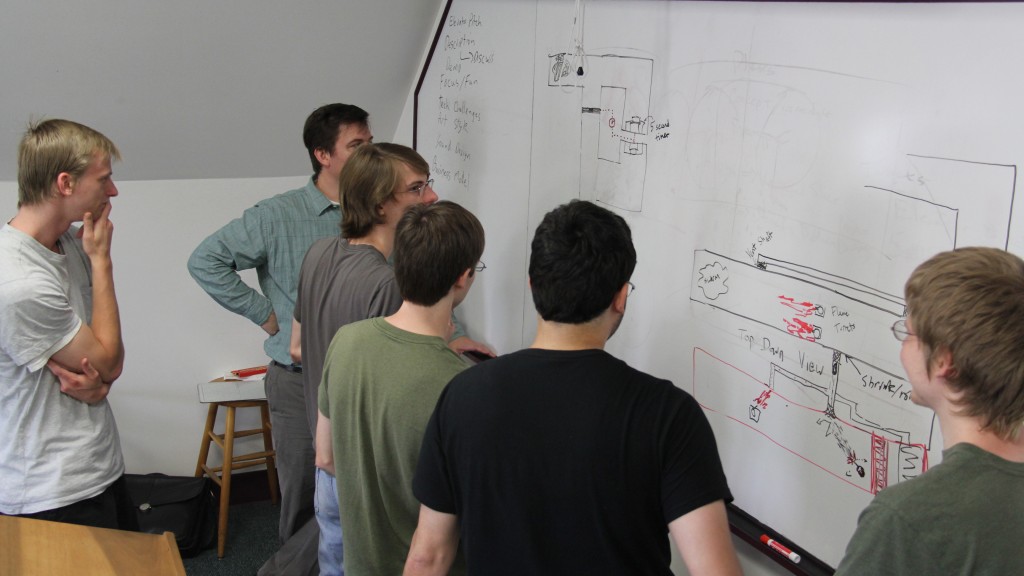 80HD and Walt Yarbrough breaking down their design.

As students working on several game projects at SIP, we’ve found that making a video game isn’t as simple as drawing some art, assembling some code, and selling it. As we work on our projects we got the chance to workshop a project that Brian Kaskie, CEO of Social Media Applications LLC, and his team are working on.

Social Media Applications is interested in making a game that will teach its audience the joys and challenges of parenthood. They hoped to coordinate with businesses and charities to provide materials for the audience on what raising a family really entails. Kaskie pitched the game to SIP, but found that the questions and comments had less to do with their partnerships and more to do with the game itself.

When it comes to moving from concept to execution, the SIP participants have found that grasping the scope of the game is incredibly important. What is being attempted? Is it feasible? And, most importantly, is it fun? Even if the project is realistic, retaining perspective will help ensure that the game doesn’t suffer from feature creep, and keep attainable project goals.

One of the details that the SIP interns focused on was that Kaskie’s team had less gameplay than monetization.  Understanding that without a fun game there would be no audience, the team went back to really figure out the core fun of their game.  The fun would drive the monetization.

Games are a method of escape, of release. The most important word in the phrase ‘sponsored game’ is ‘game’, not ‘sponsored’. Knowing that, the SIP interns thought of comparable games, and were able to present an idea on how the game would be played in the social gaming market. The group understood that while the social impact of the game was important, the focus had to be on building a good game first.  As ideas were kicked around on the theme of raising virtual kids we were able to come up with some neat mechanics and game concepts.  We look forward to see what develops. – Oleg Brodskiy