The importance of community in games

A little over a week ago, Ichiro Lambe from Dejobaan Games stood in front of a crowd of Worcester-area college students in the lecture hall at Becker College. He spoke animatedly, not about the secrets of creating a great game or the magic to becoming a big name indie, but about something few think about when the subject of game making comes up: community and collaboration. 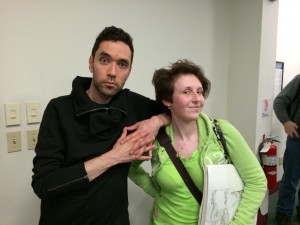 Students already know the value of collaboration on a small scale; we have all taken part in game jams or, failing that, have worked with one another to complete a project.  But, the idea of an entire community based around the creation of games is still a bit of a foreign, out-side-looking-in concept.

Ichiro discussed the growth of gaming communities in different places around the world – from Boston to Vancouver; beginning with, in some cities, a few interested people in a pub and then growing, as he described it, Katamari Damacy-style, into huge, vibrant communities.  A community that collaborates provides anything a budding indie needs to make a name for him or herself, from industry connections to honest constructive criticism from programmers to artists and everyone in between.

He also stressed the importance of networking, talking about how simply knowing one person might mean the difference between success and failure in the industry, because it’s not always about what you know, but who you know as well.  Ichiro ended his lecture by insisting that all students regularly attend the Boston game development community meet-ups to introduce ourselves to future peers and begin making the acquaintances which may one day be the catalysts for our success.