Getting through the grind

We all started our games this year with so much enthusiasm and vigor it was almost palpable. We were excited to make our games and had spent the time figuring out exactly where we wanted to go with the design. We all had a clear vision. So, what happens when the only consistent feedback about the game you envisioned is “This game stinks” or “I don’t get it?”

That’s what happened to the Gladiators team with our game Colosseum Coach. The even more disheartening thing was then when we asked all our testers what they wanted and we were either greeted with “Make it more like Minecraft” by the kids or a just a simple shrug from the adults.  We didn’t sit around feeling sorry for ourselves though. We got back on that horse very quickly by making 5 very different quick prototypes over 2 days and playtesting with anyone we could grab. We got our feedback and settled on our choice of game, an intro to RPGs. The problem is, we didn’t finalize anything. And I mean anything. We made systems, tools and art resources having no idea if they were going into the final game, with communication errors going so far as not even knowing how many gladiators were in the party. We ended up often saying “we’ll figure that out later”. This is a horrible phrase. If you catch yourself saying this, stop procrastinating and decide on something. Everything can always be changed later, you just need to try something. We didn’t and left everything hanging in the air for a bit. This killed team motivation for a while. We were in a tired rut. MassDiGI managing director Monty Sharma likes to call this part of the process the Mesa of Misery. 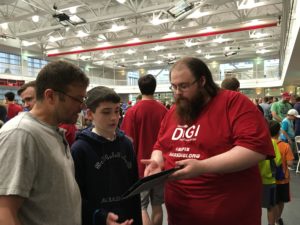 The fix was pretty simple though. Set in stone as much as possible. This gives everyone obtainable goals to make the tasks ahead not look so daunting. Everyone can see the document and know the exact details the team has agreed on. It cleared up so many communication issues along with giving everyone that little ray of hope of a near objective. We now had the goals to get through each day instead of each week. Make little mini-celebrations out of them, remember that you just fixed something in the whole picture of the game. It seems like this mesa is starting to get a little less miserable.

The point I’m trying to get to here is that you need to set your own vision. Your vision, not somebody else’s. You can certainly take advice from others, but you need to be able to filter it. I don’t really feel that incurring a lawsuit from Mojang by ripping off Minecraft completely is that great of an idea. Vision is what motivates you through the long work days. It’s tough staring at an LED screen doing the same repetitive things for a game that needs several more sprites or scripts. Making a game on a professional level is a huge undertaking that is hard to really understand until you have to do it. There are so many steps that have to be completed to get the ideas from paper to the actual working device that’s it’s so easy to lose track of the little accomplishments you’ve done. You need to grasp all of them tightly to remember you are in fact making progress. You are doing fine. You will get it done. Maybe not tomorrow, but someday. You just have to be patient and focus on why the game is making giant gladiators for some reason right now.