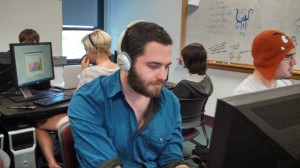 I had no idea what to expect from professional game design work. You’d think that as someone who’s spent, at a conservative estimate, 50% of my leisure time in the last year gaming I might have had some idea of how they get made. The fact is, despite games occupying such a large slice of the entertainment industry (grossing $30+ billion annually worldwide), I’ve found that most people have an at best vague idea of the game design process.

Now that I’m here at MassDiGI‘s Summer Innovation Program, I can’t remember what I ever imagined a game lab to look like. I knew what not to expect: that not much time, (if any) would be spent gaming. I knew that it wouldn’t be the adult-playground style work environment we’re led to believe companies like Google or Facebook keep for their employees. My parents have been remarkably supportive of what could have seemed like an unrealistic dream, but I think part of that comes down to my correcting misconceptions as early as possible. For instance, a work-day spent making games doesn’t include any actual game-playing. There aren’t even any game controllers in the whole building!

We work in relatively spartan, climate controlled computer lab; four teams, with about five people per team. Most people are either a programmer or an artist, with a few people working entirely on abstract content design. As a programmer, I spend most of my day looking at code, or at Unity, the game development software we’re using. Unity’s job is to handle all of the complex or technical things (talking to the operating system, lighting, physics, display and platform settings) that would be out of the scope of our program to code by hand. I’ve found that when I talk about my work, one of things people find most difficult to imagine is what I might have on my screen while I work. Allow me to introduce you to the Unity user interface. The ‘hierarchy’ keeps track of everything in the level currently being edited, the ‘project’ is a master list of objects in your game, the ‘inspector’ panel lets you tweak the variables of selected objects, and the ‘toolbar’ has utilities for running and pausing our game, as well as navigating the 3D space. I wish I could describe what the artists do in as much detail, but honestly, I would only be exposing my own ignorance. They use professional art programs to make beautiful art for our games at a remarkable pace, and that’s really all I’m qualified to say.

This opportunity – to work in a facsimile of a real game studio – is about as much a dream come true as I can handle. The development process has been so inclusive to every team member’s creative vision, since so many decisions need to be made in just a single day of work everyone gets to have their own stylistic perspective integrated into the project, right in front of their eyes. Artists are consulted about game design, and programmers are consulted on art design; it’s really wonderfully collaborative work! It may be a long time before I get this much creative control and self-direction on a project again, but I’m reinvigorated to achieve my dream of being a professional designer by this experience. Now that I’ve seen it firsthand, I can say this is a professional environment I could really see making a life in.