Here’s to one hell of a summer

As SIP is coming to an end, everything seems a little bittersweet and surreal. After almost four months of living and working with so many amazing humans, normal life back at school will certainly be a wild change.

My favorite experience during SIP was definitely being able to work with every team here. As the sole audio representative, it is my job to make all of the music and sound effects for every game this summer. Each team had a different game that required its own style of audio which made every day full of a variety of work. It was great fun being able to record and write in so many styles and even record some of my co-workers for some of the sound effects. This was extra fun because all of the people here are incredible, not just as co-workers but also as friends. 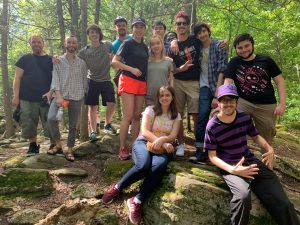 Each day is filled with many ideas being thrown around, everyone asking for critique on their work, people learning form one another, many laughs, and (after work) maannnyyy games of Super Smash Bros.

In the beginning of this summer I was worried about being on so many teams because I was afraid that no one team would truly see me as a member; that I’d be seen as my own team. This worry quickly dissipated due to the spectacular people and I couldn’t imagine a better way to work with my fellow SIPers! However, being on so many teams was an interesting task too as I had to juggle many equally weighted responsibilities. Over the summer we all used a method called Kanban to manage tasks and track progress. Although this was great for each team individually, I found that I needed to develop my own way of keeping track of my progress on a macro level so that nothing was forgotten.

Overall, my time here at SIP has been absolutely incredible and has taught me more than I imagined I would learn about games, problem solving, collaboration, and just being a decent human being.