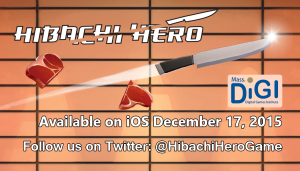 chi Hero, a free, fun and fast-paced first person food shooter released today on the App Store, came from the imaginations of talented MassDiGI SIP interns Sai Timmermann from IUPUI, Melissa Chiu from RIT, Chris Bruno from Becker College, Mackenzie Denker from Northeastern, Uyen Uong from RPI, Rejon Taylor-Foster from Becker and Alex Ripple from Berklee who all teamed up to bring the game to life.

Working together this past summer, the team, using Unity, produced a great game (watch the trailer here) which caught the eye of our New York City-based game publisher  partner, Thumbspire. From there, in coordination with Thumbspire, we brought Hibachi Hero into our LiveCode Studio program at Becker during the fall 2015 semester. Through LiveCode, more students from Becker as well as other schools had roles in the further development of the game and getting it ready to ship.

This fall, the LiveCode launch team, a group of students from across a range disciplines, put the final touches on Hibachi Hero and it is now available to download for iOS (coming soon for Android on Google Play – stay tuned).