Last week, entrepreneur and philanthropist Desh Deshpande and Governor Deval Patrick had a great conversation about the culture of entrepreneurship and its potential for the state’s Gateway Cities. No city represents that potential better than Worcester, which is why the conversation, part of “Innovating for Growth: A Gateway Cities Symposium,” took place, appropriately, at WPI’s Gateway Park. 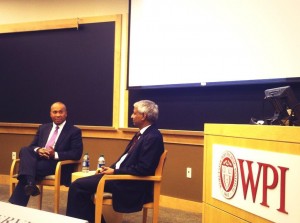 The symposium, which was moderated by Housing and Economic Development Secretary Greg Bialecki, brought leaders from the private and public sectors together for a dialogue on the growth of the innovation economy in Gateway Cities.

Over the course of the symposium one message came across loud and clear; leadership at all levels is critical.

Gateway Cities like Worcester, Lowell, Holyoke and New Bedford are fortunate to have a diversity of smart, creative and driven private and public sector leaders, institutions, foundations, entrepreneurs and companies that are committed to strengthening their communities – economically, socially and educationally – through collaboration, cooperation and partnerships.

From my own perspective, leaders in Worcester are doing a great job of aligning people, resources and ideas in ways that leverage the intellectual, creative, innovative and capital assets within the city. This is hard work – and intentional work. Fostering the conditions that allow for success is not a random adventure. It is all about planning and execution.

Over the last decade key initiatives have positioned Worcester to compete. The city’s transition from smokestacks to stem cells has been remarkable – an amazing success story in its own right. And, given the work done in recent years, it is reasonable to expect that transition to continue into areas such as software (ehealth, big data, games, apps) and robotics. In fact, we are already seeing green shoots coming up across many of those areas.

At MassDiGI, we feel not only are we serving the needs of students and entrepreneurs at Becker, in Worcester and across the state, but we’re fostering the start-up spirit so critical to competing in today’s world be it locally or globally.

And, MassDiGI is just one small example of a campus-based initiative that is having an impact. WPI’s Gateway Park is a national model for what can happen. All the work at MCPHS University has been fantastic. At UMass Medical School, many incredible things are happening. Clark, Holy Cross, WSU, QCC and Assumption are engaged and involved. On the campus edges across the city we’re seeing new businesses opening – be they spin-offs, restaurants or shops. Not to mention all the activity surrounding City Square, Union Station, DCU Center, Shrewsbury Street and the Canal District.

Yes. There is plenty of work to do. Worcester has challenges but the prevailing conditions are in its favor. The building blocks are in place. With a sustained, collaborative effort, I imagine an exciting decade to come.