Kanban: From zero to demo in three days

For the past two years during the MassDiGI Summer Innovation Program, we used a heavily modified Agile as our production method of choice (which had strengths and weaknesses) as noted in this blog post last year.  At the end of the 2013 program we went through our post mortem process. Every option was examined and discussed with our inexperienced student intern teams who gave us the following feedback:

Looking back at what we had achieved with two summers of Agile – we had stripped it down so much that we were very close to the results of the Kanban process. Kanban requires much less in terms of overhead, at the cost of losing predictive and budgeting powers – features we were not able to implement in the process anyway.

Kanban is a production process focused on providing a ‘snapshot’ of the team’s work that is up to date and accurate. Kanban literally means signboard in Japanese, and the production process uses a board with a note for show each individual task, each worker, and columns to detail workflow.

Given our results in the past, we made the decision to switch to Kanban for this summer’s program and set about teaching Kanban to the interns at the beginning of the summer.

For the the 2014 Summer Innovation Program, we gave the interns the following guidelines to set-up, using the whiteboards in the collaborative studio workspace provided by Becker College. 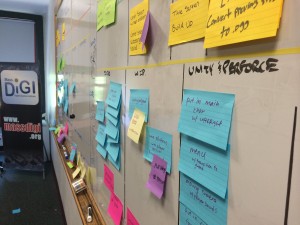 The Kanban process is flexible and we will adjust it for each different phase. To help the interns get used to working with and tracking their own tasks, each student was tasked with taking the sticky representing themselves, attaching to a task, and moving each task across the board as work was completed. At the end of the day, they take themselves off the board and place themselves in the ‘Out’ box, then when they come in in the morning, they go back on the board.

As each student has no experience with Perforce – we added the ‘Final in Perforce’ requirement to their Kanban boards to force them to learn Perforce early in the summer. At later stages in the summer, proper file control will be critical. One of Kanban’s strengths is that you can use it to identify workflow problems – a strength we used to our advantage by forcing ‘Perforce’ as a workflow step. No task can be considered complete until it is Perforce – so the students and managers saw this a problem immediately, and that workflow problem remained until the students solved it.

Another strength of Kanban is the flexibility of the production process. The interns rapidly made two modifications to our boards 1) They chose to use the unused pink sticky notes to represent Design and Documentation tasks and 2) Our most OCD student brought in colored tape and re-laid out the board to be geometrically precise – a process that we duplicated on each board.

The rapid ramp-up process for Kanban and low overhead let the students jump right into creating demos and proof of concepts of their projects.

After three days of work, two teams had already completed their demos and moved on to creating their Vertical Slice for the Alpha phase of the project. Now, after two weeks, most are nearing completion on their Alpha work, and are looking ahead towards the Production phase.

So far, we are pleased with the use of Kanban and very proud of the interns’ progress to date. As we move through this summer, we will adjust our production methods to match, and we’ll post mortem again for 2015.