Through RIDigi, I was given a chance to work with MassDigi in their studio program which has been a wonderful opportunity and an exceptional experience.

This studio, which is essentially an internship, is serving not only as a co-op for me at NEIT but also as a gateway from progressing from student life to work life in a more integrated way. From this I’ve come to learn both how personal workflow becomes when in an actual professional environment compared to school, the general structure of how a game project is organized, and new coding skills that I’ll be able to use for future projects. 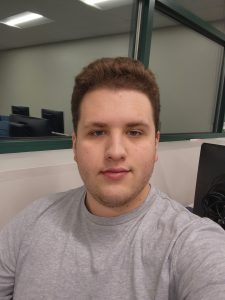 Though there were some bumpy spots early on for me, the program treats everyone with equal respect and fairness when working on various projects.  Once I got going, I joined a team – one of a few – to work on a mobile game called Cafe Cat in hope of adding new features and increasing player retention. Initially, this stunned me since I thought that everyone involved was going to be working on the same project. But, aftter joining the team we were given our specific roles for each of which we needed to both learn and perform over the course of the next twelve weeks.

I was assigned to the role of general programmer and more importantly to game dev analytics of which I only had a basic understanding at the time. Over the first week or so I spent most of my work hours learning there new programs to use and coding style, so I could perform at the same level as those who had originally worked on this project. The work environment being remote was also a change but a simple one at that since given we were able to create our own meeting times and additions for the project has personally allowed my group to flourish.

MassDigi and its producers understand that for people here they have personal, school, and other work lives outside of the internship and are accepting with open arms when something comes up. From my own group we have had a little bit of scheduling issues / personal issues which has resulting in people possibly missing meetings but being more self motivated than something like school work has allowed us for easy workarounds by rescheduling meetings or catching people up with the meeting notes we take each time after our Google meets.

The change from school to this work can be a little challenging early on requiring those participating to learn new programs or styles from existing methods they may already know but learning that these are the standard programs lets us learn once and use often for any project given to us by the industry thus preparing us for any work given. Our group and MassDigi as a whole has been using Dev-To-Dev for analytics for the game, Plastic for source control and group game development, and Ryver for communications with others in our work groups. Though something like Plastic is an extension to existing programs like Unity, learning these programs are both needed and beneficial.

Progress can be slow on development as people balance there lives but seeing the determination from my team members and MassDigi as a whole has lead to us already improving upon our Cafe Cat and pushing out changes to the public that has already seen a player increase of seventy people at the time of writing.

The skills I’ve learned, the people I’ve met, and the understanding of how an organization actually works in the game industry has really opened my eyes to the work I’ve produced. I would gladly recommend to all who have the ability to take the opportunity to apply for this studio program to both improve yourself as a game developer and as a team member.