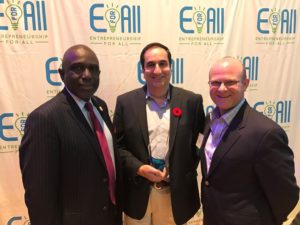 MassDiGI was honored with the first-ever Innovation Award at the 2016 Entrepreneurship for All (EforAll) Summit in Lowell, Mass. on November 3. EforAll is an organization that works with mid-size cities to spur economic growth and create social impact within the community. This international conference brings together city leaders, investors, foundations, organizations, and schools committed to entrepreneurship and social impact in mid-sized cities. Summit speakers included entrepreneurs Ted Leonsis, owner of the NBA’s Washington Wizards, the NHL’s Washington Capitals and former senior executive at AOL, and Doug Rauch, former president of Trader Joe’s.

Speaking about the award, David Parker, executive director of EforAll said, “The Innovation Award seeks to recognize a program that’s doing something different to spur economic development in mid-sized cities. MassDiGI’s nomination stood out immediately and EforAll is proud to recognize their innovative efforts of utilizing the digital and video games ecosystem to foster economic growth.”

Since 2011 MassDiGI at Becker College has been a state-wide driver for entrepreneurship, academic collaboration, and economic improvement in the digital and video game industries across the Commonwealth. Remarking on the award, MassDiGI Advisory Board chair, Becker President Robert E. Johnson said he was “so proud of all MassDiGI and Becker have accomplished over the years. It is great to receive the recognition of such an important entrepreneurial group like EforAll. It really affirms the mission of MassDiGI and Becker to equip future innovators.”

MassDiGI Executive Director Tim Loew accepted the Innovation Award. “Our work with entrepreneurs and students over the years has been rewarding and humbling in its own right – and being recognized for that is very meaningful,” said Loew.

Loew participated in a panel at the Summit entitled “How to Keep/Attract Young People in Mid-Sized Cities.” Panel discussion focused on methods that cities, organizations, and colleges can deploy to retain an energized group of young people looking to make a difference. Fellow panelists included Andy Vargas from EforAll, Justin Kang from City Awake, the civic innovation lab of the Greater Boston Chamber of Commerce, Karina Leblanc from the University of New Brunswick’s Pond-Deshpande Centre for Innovation and Entrepreneurship, and Chris Miller of the St. Louis-based Mission Center L3C which is an incubator and accelerator for high-impact social enterprises.

Alongside MassDiGI, Kyla Pacheco of Action! Worcester won the Top Entrepreneur Award which gave Worcester a large presence at the Summit. Worcester City Manager Edward M. Augustus, Jr. stated, “Entrepreneurship has played a pivotal role in Worcester’s past and continues to do so today. And, with the award-winning efforts of MassDiGI and Action! Worcester I look forward to what our future holds.”