There is one main difference between a group of people working together and a team. Any group can seek the same goal, but ultimately, their destinations differ. A common destination is a treasure only a team can lay claim to.

In two weeks, the group of developers working on MegaloMalady became “Team Awesome.” We dropped the unnecessaries of courtesy and convention. We unified our separate visions with compromises, votes and new ideas that were just plain better. We strove for clear communication. Our effort to designate a unified vision was what gave us combined ownership over the idea we devised. It is that combined ownership that allows us to work as a whole and professional unit. 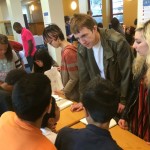 Communication is the bread and butter of our workflow. Every morning, we stand to update each other on our current progress: what we did yesterday, what we plan to do today, what’s stopping us from progressing. We work close to each other, meaning questions between fields of expertise are only a table away. Multi-disciplinary tasks are easily collaborated upon between programmers, animators and illustrators. Above anything, we are never afraid to critique or be critiqued. Feedback is essential to success so there’s no sense in being shy about it.

Where one person is lacking, the next person is strong. Sometimes we like to think we turned a misfit rabble of talents into a capable party of developers, fit for a proper adventure. We all see a published, enjoyable game at the end of our 10-week-long journey and we are proud to dedicate ourselves to that collective cause.

Team Awesome consists of seven members, one designer, two programmers, three artists, and one audio ninja. We are creating MegaloMalady, an incremental game where you play as Germy the monster who seeks friendship and brings disease.