We have been in the swing of things here at MassDiGI SIP16 for a few weeks now. In this time our four teams have worked on many ideas trying to find the best ones to implement in our games. While my team had the core idea for our game within the first day or so we have been working hard to try new ways to make our game enjoyable. We want it to be as polished as possible. Of course, one of the best ways to do this and to try out ideas is playtesting. Even though we enjoy bouncing ideas off of each other and trying them for ourselves there is nothing that quite compares to the feedback you can get from people playing your game for the first time. 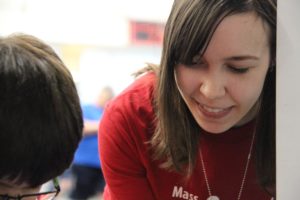 The team I have had the pleasure of working with is making a game about stacking cats on top of each other. The goal of this is to get the highest score you can and have a bit of quirky fun. The team is comprised of six other talented folks, the first being our star producer, Tyler Haddad, who attends Becker College. Another Becker College student on the team is Ben Page, our head programmer. Our head designer and one of our other programmers is Sienna Cornish from Hampshire College. Graham Held is our primary 3D artist from WPI along with helping the programmers. Fury Sheron from Tufts University does a bit of everything, while also being our primary UI designer. Joe Marchuk from Berklee College of Music does all our audio. My role consists of head artist, which has been an incredible experience so far.

Our first true round of playtesting (that did not just involve all the SIP teams playing each other’s games) came from the students at Worcester’s Elm Park Community School. They were a wonderful bunch of kids eager to play our games and give us feedback. Through watching them play, my team realized that there was a competitive aspect to our game that we had not even thought of. Many of the boys would compete against each other to try and get the highest score. One kid impressed us all by achieving the then highest score of stacking 126 cats. While the kids gave us a lot of positive feedback we also started to realize we had a few problems. Parts of our game seemed difficult to figure out. Even though the kids were smart enough to teach each other and ask questions, we did not have the intention of making our UI or gameplay mechanics confusing. We were able to ask the kids what they found difficult and resolved to come up with ways to fix the issues. 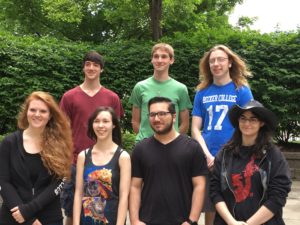 When it came to encouraging feedback the kids were not shy about letting us know what they liked about the game. While it seemed to be an even 50/50 split on people who loved cats versus people who disliked them, the theme did not seem to get in the way of people enjoying the game. Though, some of the kids did have the suggestion of making the cats into babies you could throw instead. They also told us about how they liked the shapes we had chosen to make the cats and that the gameplay was addictive. (Yes, a 12 year old used the proper form of “addictive”).

After our playtesting session with the Elm Park kids we got the opportunity to demo at Petricore Games. There, we received positive results. We were told that the core gameplay was fun but there seemed to be one little thing missing to really make the game great. We also realized another aspect we needed to make clearer. One important part of my team’s game is that there are sticky cats. These particular cats let you build your tower even higher. One could say they are a vital aspect to the game and yet, people didn’t realize they were sticky until after we told them. With this in mind we knew we would have to figure out some way to make sure people knew about the sticky cats so they could properly enjoy the game.

The next big play testing opportunity came from attending Touch Tomorrow at WPI. At this festival we took turns showing our game to kids and their (often, though not always,) reluctant parents. 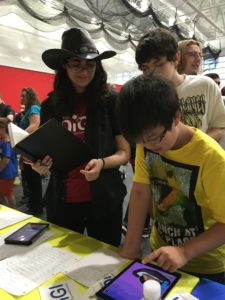 We received a lot of similar positive feedback as our first playtest. Certain people found themselves unable to put the game down. Boys would play the game and then come back with their friends to make them compete. Through this we realized that while girls would play the game they did not seem as eager to continue to play it as the boys. This realization gave us something to consider with how we were going to try and get any kid to enjoy our game. Also through this test we were able to see if our improvements from all the previous feedback were working. We tried to make the sticky cats more apparent and had tweaked some of the UI to hopefully make it less confusing. Stars were also added around the cats as a collectible element to improve your score. In doing this we hoped that we had found a possible solution to that “one missing thing.”

While the stars received mixed reaction there were bits and pieces of feedback that we realized were really helpful. We even had a former SIP intern come and playtest our game while at Touch Tomorrow. He let us know what was working with the technical mechanics of our game and overall really liked it. However, even with the stars he agreed that the game was missing something. With all of this in mind we left Touch Tomorrow with a better understanding about what was working with our game and what we still needed to work on.

Overall, I have really enjoyed playtesting our cat game with my team. We have received exceptionally helpful advice (and some not so helpful advice). Through this experience we have learned to think critically about what people are saying and how to pick out the most important parts of what will possible improve our game. Meeting people and watching them have fun with something I have helped create has been incredibly rewarding. Thankfully, I will get to do this for a while longer with my wonderful team because there is always more playtesting to do!