So, we’re halfway through SIP. 7 whole weeks. You’d think we’d be old hat at the whole SIP thing at this point. If this internship were a class we’d be at midterms already. But, like the one unexpected question on your U.S. history midterm, MassDiGI’s Summer Innovation Program is still full of surprises. Thankfully, these SIP surprises are a lot more pleasant and welcome than frantically trying to remember the five major causes of the Great Depression.

One of the bigger surprises for me has been playtesting. Before coming to SIP, I had always heard that playtesting was important, but I still rarely put my games in front of people. Now, I better understand the value of showing your hard-fought efforts to the general public and watching them pick apart your game with casual callousness. We’ve been testing our base game and its mechanics for a long time. During early testing sessions, we ended up getting a lot of the same feedback. As a result, we figured that playtesting would eventually be mostly unnecessary. After entering production, we went without playtesting for a while. When a Becker College STEAM camp rolled in, we prepared ourselves for the same back-and-forth we’d had with previous playtesters. The game had changed, but not by an especially large margin–part of production was throwing away our build we had been showing off, and recreating it mostly from scratch. Since the game was roughly the same, we expected the feedback to be the same. Surprisingly, this was not the case. We got some brand new data, brand new comments, and brand new suggestions. The feedback we got helped us steer our next decisions, and we might have made a lot of needless mistakes without it. That surprise potentially saved us a lot of work. 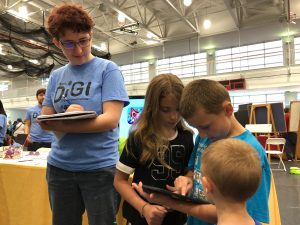 The next surprise comes from my teammates. At this point, we’ve settled into a rhythm. We all know what we’re supposed to do, and how to communicate with each other about what needs doing. However, even though we’ve been working together for quite a while now, all of my teammates have managed to exceed my expectations multiple times–whether it’s producing a great art asset, fixing a difficult bug, coming up with a great design idea, scripting a new enemy attack pattern, or adding that one extra bit of UI polish that takes hours, but makes the game feel so much better. It seems like every day someone does something that really amazes me, and considering that I’m a bit of a perfectionist, that’s impressive.

The final and most pleasant surprise from SIP is that none of this has become boring. You might think that after working for hours at a time on a single short animation or sifting through yet another article on mobile game monetization, you’d be getting a bit tired. But I’ve never come close to wishing I was somewhere else, doing anything else. Making games is a great time, and I don’t want to stop anytime soon. So, it’s a good thing that we’ve got the whole rest of the summer. Hopefully, I’ll keep being surprised.

Oh, and one of the causes of the Great Depression was the stock market crash of 1929.