Hello!! I’m Julia Sherbal, a rising senior at Northeastern studying computer science and game development. This summer, I’m working as a producer and programmer for Team Samosa on the game Cafe Cat.

Throughout SIP, I’ve done a lot of challenging work. Brainstorming game ideas, programming a game from scratch, and managing my team’s tasks are all difficult jobs I had to learn how to do properly. However, none of these things were as scary to me as the complicated art of networking. 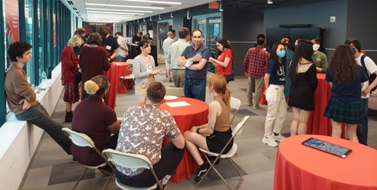 Last week, we had multiple events for networking. As a programmer, I tend to be shy, and social situations can get quite awkward. For these events though, I had to tap into my producer side to be prepared for small talk and asking for LinkedIns… Horrifying. Being a producer has helped me step up and be more outspoken as I’m the one who has to represent our team.

On Monday, we had the opportunity to show off our games in Boston at WPI Seaport! I have made games in the past for school work and game jams, but people never actually play them. It was nerve-wracking to put our game out on display, but I knew my team had been working super hard, and I was excited for people to see it.

It was really rewarding to see people play and respond well to our game. We’ve been in production for about two months now, so a lot of hard work and care has gone into our cat game. All of that effort paid off when I saw how people lit up upon seeing our cat character designs, bad puns, and glitter effects. Watching people excitedly scramble to make enough tips in our game is one of my favorite moments this summer. Every little detail my team and I worked on over this summer had built up into a project I’m really proud of! 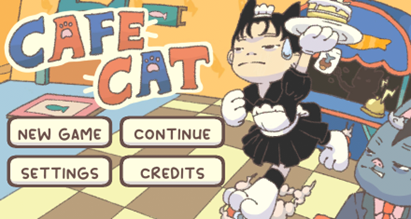 At WPI Seaport, I got to meet really cool people from companies like Modulate, Maxis, The Deep End, and Fire Hose Games. If you were at WPI Seaport and played our games, thank you so much! I want to work in the games field, so it was great meeting industry people in the Boston area, hearing what cool stuff they work on and how their journeys brought them to where they are now. There were also a bunch of past SIP alumni, and it was fun being able to see the network of talented, awesome people I now belong to! Turns out I had nothing to be scared of, everyone was really nice and easy to talk to.

We only have a week before our game launches, which is really exciting! It’s also quite scary, as there’s so much left I want to do. I know I’ll miss going into the Innovation Studio every day and working with my team.