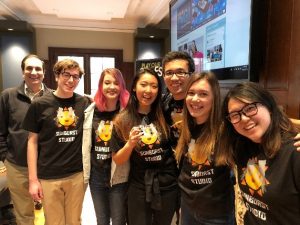 Sliptime Sleuth, an isometric, neo-noir puzzle game where the player, a time-traveling detective, slides through time in order to uncover clues and solve a crime, was created by Sunburst Studio, a team made up of six Worcester Polytechnic Institute (WPI) students Tyler B Marcus, Mari Endo, Dylan Valev, Jasmine Duerk, Mackenzie Goldschlager and Karen Hou.

“It was like a dream come true for all of us when Sliptime Sleuth won the Game Challenge,” said Marcus. “If you love making games then this is a must-attend event. You learn so much from the judges and all the other competitors, too.”

The game edged entries from top independent game developers as well as other student game developer teams representing other institutions such as Northeastern University, Champlain College and Becker College. Sliptime Sleuth (gameplay video) will be released on PC next year.

“The feedback we received at the event was outstanding,” said Endo. “We have a much clearer sense of the direction we need to go to produce the game we want to make and how to make it successful.”

The MassDiGI Game Challenge, in its eighth year, helps indie and student game developers and entrepreneurs hone their business focus, shape their ideas and products for launch. This year 37 teams from across the New England registered to compete in front of a packed house at the Colleen C. Barrett Center for Global Innovation and Entrepreneurship on the campus of Becker College in Worcester.

“Earning the Indie and People’s Choice honors for Feral Frontier exceeded our expectations,” said Cheney, “This was our first time at the Game Challenge and the experience was amazing.” 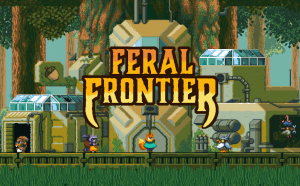 Since the MassDiGI Game Challenge began, nearly 300 different teams from around northeast and beyond have pitched games and taken home prizes valued at over $100,000. Top past winners include titles such as Salad Hunt, Intern Astronaut (VR), PWN, Catlateral Damage, Depression Quest, Wobbles and Starlot Derby.

As the Grand Prize and a College & University Group winner, the Sunburst Studio team won cash and other prizes valued at about $5,000.

“This year’s contest was as close a competition as I’ve seen,” said Monty Sharma, managing director of MassDiGI, “Every team was really very impressive and the creativity and skills on display improves every year as do the games.”

The other College & University Group winners were Basic Witch from Becker with Project Birchtree, a mobile game about a laid-back, enchanted latte-throwing barista witch trying to save her town from being overrun by demons. FPS from Northeastern with Fruit Postal Service, is a battle racing game for PC where you play as a member of the FPS and try to pick up and drop off the most packages to become the employee of the month. And, Team Disco*Vision from Champlain with Blood to Ink, a narrative-based murder mystery game for tablet.

The complete results are posted here.

The Massachusetts Digital Games Institute (MassDiGI) is the statewide center for academic cooperation, entrepreneurship and economic development across the Commonwealth’s games ecosystem. Established in 2011 and based in Worcester at Becker College, MassDiGI has launched several initiatives that support entrepreneurship and strengthen the talent pipeline between higher education and the game industry. Well-known initiatives include the Summer Innovation Program LiveStudio and the Game Challenge – all of which bring students and professionals together to work on real projects. For more information, please visit www.massdigi.org.