Orientation seems so distant now that we are starting the third week of the program. At the start of MassDiGI’s Summer Innovation Program, the interns were ushered into a lecture hall and met Monty Sharma, Tim Loew, and Walt Yarbrough. We talked about game business, production, and some marketing. Between these discussions, we were grouped together several times a day to learn how to create game ideas and pitch them to the rest of the participants. We quickly learned how to get into the mindset of creating games that sell rather than pitching vague what-ifs. 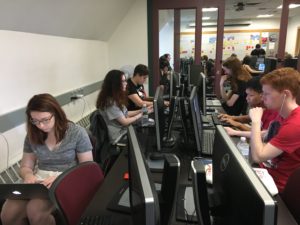 The next week we were divided onto our teams. Monty announced producers and team members assigned themselves various roles. I was named producer and voted lead designer for a political game, which is affectionately (and temporarily) called Campaigious.

The Campaigious team is comprised of incredibly talented and dedicated artists and programmers. Liz Lanahan from RISD and Erica Lyons from Becker College, the artists, have pumped out more assets and backgrounds than I thought possible. The programmers, Ian Clinkenbeard from Becker, Fandi Charifa from NYU, and Conor Canavan from LYIT have gone above and beyond what is expected of them. Currently we are struggling to choose between a more strategic route or a fast-paced clicker. Regardless, we hope to release the game at the end of the program, and if we keep up the momentum, I’m sure we can.

By the end of week two, all teams had blazed through their concept and prototype phases and started production. We had some mentors visit and had a couple of demo sessions. We also had many, many meetings discussing ways to keep up our energy, make smart decisions, and prevent us from falling too far behind in production.

Looking forward, we have several demos coming up in June and I think everyone is excited to start showing off our games to the public. Until then, we’ll keep moving along!