Our team was two weeks into development when we were met with confused faces of playtesters. It was then we realized we had revisit the drawing board, as reluctant as were. You see, the game we were making here during MassDiGI’s SIP16 was too complex and lacked direction. Distracting visual elements overwhelmed our players, and the goal wasn’t simple enough to explain without a tutorial. Even worse, we didn’t have decent comps (comparables) or a target audience. Everything needed to change.

Our original concept was a rapid decision-based game about gladiators, where you play as the emperor and decide who wins or dies to please the audience. When we tested our prototype, players didn’t like the timed decisions, as the mechanic lacked real consequence and the “right” choice was not clearly communicated. With this feedback, we concluded that the premise we were tasked with was ultimately what held us back.

Before I tell you where we’re going next, let me tell you about us! While our title is still up in the air, we just call ourselves the Gladiator Team (you can identify us by who uses Ryver the most). There are 7 of us: 3 programmers, 3 artists, and 1 audio designer. The programmers are PJ Keenan and Anthony Popp, both from Becker College, and myself. Coding our prototypes coincided with turning to each other and saying “Guys, I promise I can write better code than this.” Mariel Rodriguez from RISD, Sofia Syjuco from Carnegie Mellon, and Catherine Litvaitis from RPI make up our art team. Their ability to deliver numerous high-quality assets is unreal (the gifs are a sweet bonus). Sofia, also our producer, rocks the Kanban board and has a real voice in leadership. And finally, Joe Marchuk (who you’ll probably hear about a lot on this blog) is our sound designer from Berklee College of Music. The compositions he writes blow everyone away, and somehow he does it without musical references from the rest of the team (whoops). 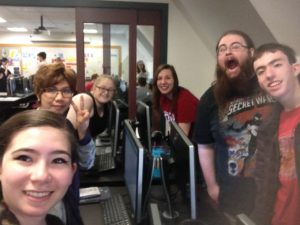 The first couple days were easy for us, but the rosy glow began to fade (as MassDiGI’s Monty Sharma warned us). We needed to work together and faced some problems trying to do so. Growing pains, let’s call them. But we learned. In fact, we’re still learning. So by no means are we perfect, but we’ve developed better understanding of each other’s work-styles and methods of communicating in a respectful and honest way.

Now… where are we going from here? Well, we conducted thorough playtests yesterday and had a long design meeting this morning. We decided to center our new mechanics around a roster system, now approaching the project with a fantasy football perspective. Players seemed to really respond positively to the day-old prototype that explored this idea, instantly picking favorites among the new gladiators, who were each accompanied by combat stats, a name, and flavor text. We really want to encourage these relationships moving forward.

The Gladiator Team is heading back into the alpha stage stronger than ever. Now with clear direction, let’s keep up the momentum. Get excited for the next build!