Before college began for me, I always saw myself becoming a composer who would never have to talk to anyone. If I was making a game, I imagined myself alone, just sitting in my safe cave, creating some music tracks and sound effects, sending them off to the director, and then waiting for the product to be released without worrying about having to meet people and talk about anything while working on my next project. I’d totally get away with that, right? Not being social, just making music for other people. That’s a way to get around, right?

If I still believed in living in a shell, this program proves how I would never survive reality. And you know what? Because of this program, I am already thankful that I will always try to break away from that mindset. 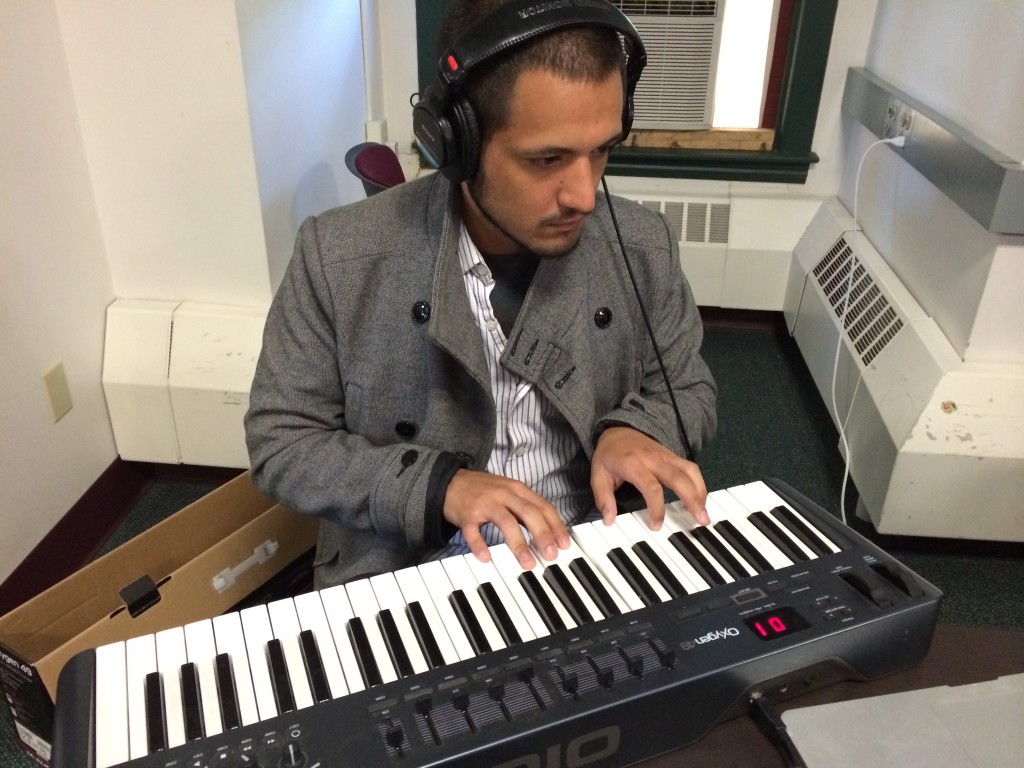 For MassDiGI’s 2014 Summer Innovation Program, I am the music composer and sound designer/editor of the 4 games being created. Usually, I am just known as “The Sound Guy.”

I have to confess, it can be quite odd being in charge of an element for 4 games at the same time. For instance, each morning, the 4 teams have stand-up meetings that allow the team members to discuss their daily tasks and objectives. Obviously, I can’t clone myself and attend all 4 stand-up meetings that happen at the same time. That and I need to keep track of audio assets for everyone. This includes tracks of music that loop, sound effects that will be added to the UI and the characters in the levels, and, on occasion, needed dialogue for narrators or character lines. And to top it off, we’re required to talk to each other. This seems rather intimidating.

I can’t just stop talking to the teams as I’ve already gotten to know everyone after spending time with them while also living at Merrill Hall, a Becker College dorm.

But, by being with them at the dorm and during work hours from Monday to Friday, 9:30am to 5:30pm, I realized something amazing. These designers are incredible people to spend time with. I already consider them friends, and am still blown away by their modest attitude in their incredible work and their conscious efforts in making sure that everyone in a team is satisfied with the current progress of a game. There is no away that I could let these people down.

Sure, I don’t know a thing about coding mechanics or drawing/rendering art, let alone draw a shape or figure of any recognizable kind on paper, but I could listen to their amazing ideas and maybe even suggest an idea or two when making the ideas for the games. Maybe in a tower defense game about toys coming alive, we can have teddy bears. Or dust bunnies. Or maybe even milkshakes that come alive. That’d be so cool.

And yeah, sure, some of these ideas don’t make it, but there’s such a joy I’ve come to love in having so many ideas put on a piece of paper and working as a team to look at what’s best for a game concept.

Even though SIP orientation week was tough in that we had to go through quick exercises of creating game concepts in less than 10 minutes by talking with each other in groups, I realized that no matter how tough a task may be, there is never the feeling of being left behind.  I’m just a weird, artsy sound dude, and yet I can contribute ideas to these game concepts. That was a powerful feeling and made me realize that communicating with these incredible developers I can call colleagues may not be as daunting as I thought.

Our Alpha builds are ready to go and be play-tested. With each week come more ideas and objectives put as tasks on our Kanban boards. The creativity of these teams has helped me immensely in pushing myself to give music and sound to these projects. There’s a lot done already, but so, so much more that needs to be made. And, now I think I can speak for all of us in saying that we now see the beauty in the amount of work that lies ahead. This summer will be hard work that we can share with each other, and no matter how the games come out, they will be products of combined perspiration and confidence.

I’m going to miss everyone when this is all over. For now, it is time to get to work.