So, I’ll start by saying that my personal favourite game is football (soccer), which means that my week did not get off to the best of starts (hint: tell your bosses the bad news first!). I watched my country, the Republic of Ireland, crash out of the UEFA Euro 2016 cup. But I wasn’t too upset as they had done themselves and the country proud. You see, individually, we were among the least talented nations in the tournament, but the team had made history by getting as far as they had. This was accomplished because they fought tooth and nail for each other. They had proven to me once again that with teamwork you can accomplish huge achievements against the odds. 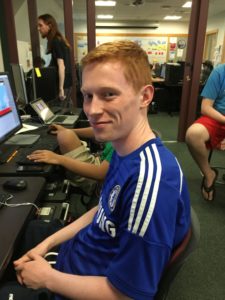 With all that in mind I want to talk about my team and by extension, our game which is for now named Takeover Trail, formerly Tap’n’Takeover, formerly Campaigious, formerly Infectiganda. The initial idea was to produce a cross between Plague Inc infection­-style gameplay and politics. That has changed dramatically from then to where we are now. The changes have been made as a result of many playtesting sessions and events, which you can read about in past blogs. Our game tried to mix two very different mechanics together, which were just not mixing well when it was tested. So we had a meeting. We then devised a plan, but largely ignored it and continued development. After more playtesting it was apparent that we were not moving in the direction we had hoped. We were straying away from each other and not working together. Ideas were spoken about but never acted upon, or critiqued in a helpful way. So we had a meeting.

As a group we said enough was enough. Our core mechanic had become tapping, a feature we all hated, so we used this hatred to bring us together again. The tapping was removed, debates were removed, and even Jimmy Chonga our now infamous AI was left in the cold where it belonged. Plans were made and stuck to this time. We are where we are today because of a decision taken in week 3 by us as a group “let’s just make Plague!”, and so the drawing board was taken out of storage and we went back to it.

(This is where you tell your boss some positive things before they send you packing). So we took my fellow programmer’s aptly named project Ian’s Idea and built upon it with one core idea in mind. We now started making decisions together, all while keeping scope in mind. After further playtests the feedback we received was more and more positive while retention rose every time we demoed at events. So whisper it quietly, but team Campaigious seems to have finally left the valley of DOOM! Although, we still need a new name. 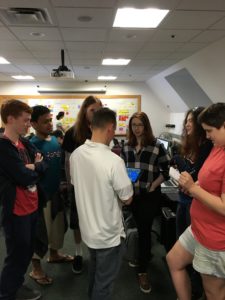 This past week we had two more in­-studio visits including Walter Somol, the VP of publishing at Harmonix, who came in to talk to us about things he liked and disliked about the industry. He gave us great insight into his past experiences in the world of games and game development, and where he thinks the future lies for the industry. It was a very interactive experience, in which Walter asked us as many questions as we asked him. On Thursday the tech director of RatDog Games, Aaron Horne, came in and spoke about overcoming setbacks. He offered insight into his team’s experiences spending 3 months developing a map that went out of scope and no longer fit the game they were making. They came together as a team to make the decision to remove it and work towards the new deadline they set. It was a decision that our team could relate to, and I’m sure the other 3 could as well.

Finally, I want to end this blog by reintroducing my team, which you may already know from our producer Sarah Spiers’ blog in week one. Sarah attends Emerson College and is currently working on the business side of the game which includes things like marketing the game, and how the game will make money. On Tuesday we welcomed back one of our artists Erica Lyons of Becker College, and are delighted to have her, along with our other artist Liz Lanahan of RISD, to help the team ease into the next phase of production and get the game looking as fancy as possible! Of course, we have our audio specialist Joe Marchuk of Berklee College of Music. And, lastly we have the programmers, myself, Ian Clinkenbeard of Becker and Fandi Charifa of NYU. They are extremely talented, experienced and a pleasure to work with. They also comment code, which is pretty frickin’ fantastic.

So, that’s got you all caught up as far as I know. You can follow us on our Twitter and Facebook, and find information about the other games Slime Break, Comet Cats and Colosseum Coach on their social sites too. Also Eid Mubarak to Fandi who breaks his last fast next week after Ramadan.