MegaloMalady’s art direction is the result of Team Awesome asking the question, “How do we make our game stand out from other infection games?” We were inspired by games such as Pandemic and Plague, but we didn’t want to use the same visual language that they did. After multiple exchanges of ideas, we’ve decided to introduce the concept of “cute but morbid,” which became our game’s core theme.

What at first glance seemed simple became a challenging concept to execute. Establishing this direction and having the art consistently follow it requires countless hours dedicated to conceptualizing and refining. An example would be our mascot “Germy”, who is the result of a myriad of different design iterations by Annie E. (lead UI) and Elizabeth Darragh (lead animator), with different silhouettes, features, and personalities. Over and over they have been rejected, nevertheless the artists continued tirelessly until one day something clicked that made Germy the adorable monster he is today. 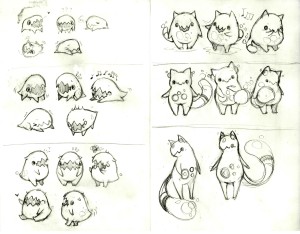 Everything has been designed to fit with our theme, from the bright and cheery houses that give off a sugary sweet atmosphere to the UI that has been redrafted multiple times to ensure the most user friendly and tappable experience. MegaloMalady has been given much praise for its art style, and it couldn’t have been possible without the dedication of our extremely talented team of artists.

Even after a clear art direction has been established, revisions have been continuously made, ensuring the highest level of quality for every individual art asset. With only two and a half weeks left and so much work left to be done, we’re pouring more focus than ever (even after hours!) into our beloved game, and I have faith in my team to march on with the same amount of excitement as we had since the beginning.

Images: A small selection of the different concepts for Germy that Liz (top) and Annie (bottom) came up with.