The art of pitching

As the MassDiGI Summer Innovation Program moves into the homestretch, the Wobbles team has been busily shifting from content creation to polish adjustments and quality assurance. In preparation for the open house on August 8th, we have been fixing up our pitches and clearing out bugs so we can better display our game to prospective buyers.

Delivering a pitch is not as easy as memorizing some words, especially for people who are intimidated by talking to strangers or large groups. Just like anything else, pitching is a developed skill, and over the summer we have been given many chances to practice. On July 15th, half of us hosted a TechSandBox demo night while the other half went to Boston Indies and demoed Wobbles there. On July 16th many of us went to our second Boston Postmortem of the summer. Every time a mentor visits, we do a round of demos for them. Each time we pitch the game a different team member contributes, so everybody gets more comfortable. When we speak to non-gamers and people outside of the target demographic, we play the game for them so they can see the polished parts, describing the mechanics in layman’s terms and emphasizing the most widely appealing aspects, like the graphics and the core fun. More experienced players or target audiences are simply handed the game wordlessly and observed. We take note of how easy the UI is to interact with, whether or not they know where to go, and if they get frustrated by any particular features. 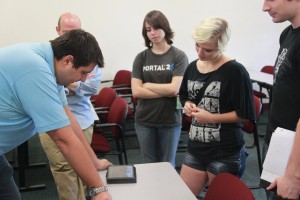 For instance, we learned that when we had our in-game unpause button in the corner, even though it was pulsing, most people attempted to begin playing and were confused when the tray did not respond. To fix this we made the game begin as soon as the player tries to drag down a platform. When we learned that people were not able to read all of the tutorial text before Wobbles started falling, we made our guides more concise. These alterations are small but crucial to a smooth play experience, and a totally smooth and hassle-free play experience is necessary to make a casual mobile game successful.

As the only team working without a partner, Wobbles in particular is focusing on social networking and website reviews so that we can have a strong start with a strong product immediately at release. We already have several websites lined up for review copies.

Laura Gagnon, lead artist, and I have also been hard at work on the visual polish of the game, and it’s finally beginning to look as nice as the other games on the app store right now. Something as simple as blurring the background so the perspective – foreground and background – is more strongly established made the game look much more professional. We have been adding a few particle effects to indicate what is to be interacted with vs what is just for decoration; the stars that you collect in each level to unlock new ones are now glittery! It’s the small, neat visual rewards that give games that extra boost of fun and appeal – Tiny Wings’ art, for example, has a clean and candy-colored vector style that, in combination with its soundtrack, lends it a very calming and sweet atmosphere.

I’m really psyched to get this game out into the market, since it’s the first one I have been a part of making. The mechanic is unique and the characters remind me of the little guys in Pocket God – quirky and really fun to mess with.

A version of this blog first appeared at http://rroberie.wordpress.com/.