After a reasonably lighthearted orientation week in which we all got a chance to meet the other interns and familiarise ourselves with each other’s experience levels, Tuesday the 26th saw things start to get serious. We were divided into four teams of six, with each team having three programmers, three artists, and a game concept to work with.

That morning started much the same way for all of the teams, scrapping the parts of their idea they didn’t like and building on the parts they did. However, the teams did take different approaches. For example, our team was reasonably happy with the core mechanics of our game, but we decided to re-theme it, which would involve more concepting work on the part of the artists. Another team started almost from scratch, pitching an entirely new batch on ideas amongst each other before settling on one to run with. 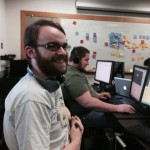 For me personally, it was refreshing to then dive right into development for the rest of the week and start working on code. Having just finished work on a year-long project for college that involved an entire semester of research and planning, getting the chance to implement systems and find issues later was a welcome change of pace. Additionally, coming from a program that teaches solely programming, I was really impressed with the work-rate of the artists! It’s great motivation to finish implementing a system due to the necessary sprites already being finished and ready to go.

Working as part of a tight-knit team and getting immediate feedback for every bit of work I do has been a great experience so far, and having industry veterans like Michael Carriere from Zapdot give us advice on the likes of playtesting is invaluable. In addition, the support and interaction between teams is great, with programmer lunches and coding jams outside of work hours helping everyone solve any problems that they may have. All in all, it’s a really fantastic workplace to develop a game in, and I can’t wait to see what’s around the next corner!