Playing grown up: The education of a game developer – 8/7/13

Playing grown up: The education of a game developer

Everybody knows that “college is a transitional phase.” Put kids in, give them some debt, and adults come out. That’s the standard procedure.

Kids have almost no control over their lives, and that’s stifling. Adults have a ton, and when a kid first starts out as an adult, they tend to either screw up, or be paralyzed for fear that they will. Low-intensity doses of Adulthood buffer the transition from Kid to Grown-Up. 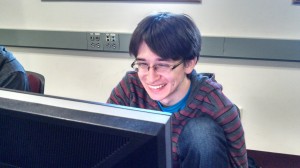 College is full of these buffers, mostly on a personal level: when you eat, what you eat, when you sleep, when you wake up, what you do awake, what you think you should do, whether or not you actually get off your butt and do any of those things you should. What to learn, and what to do with that knowledge.

There’s plenty that college alone can’t, or has difficulty, buffering. Internships, like the MassDiGI Summer Innovation Program (SIP), are the next step up.

There are lots of different reasons to pursue a program such as SIP, and nobody has just one. Some of us have never had our own earned income. Some have never lived away from home for the summer. Some have never even made a video game, and are testing the waters of the game development. For me, I wanted two main things: the first was skill with game development, which is simple enough. The second is trickier – I wanted to see what it felt like to be a grown-up.

I had a key transition when my team, working on BrainFrame, went to meet with our partners, NeuroScouting, in Cambridge. It felt like a field trip for most of the trip there, just one with an oddly small group. I still felt like a student. Then we arrived at the building NeuroScouting worked from. We made our way up the floors and stood outside of the elevators awkwardly until Wesley Clapp, co-founder of NeuroScouting and our main partner, let us in to the work area.

The rooms were huge, open spaces with rows of long tables set up. It would have looked like a cafeteria were there not computers and noses to the grindstone at every seat. I couldn’t help but see everyone in the room and think, “these people are attractive.” Not because they were all pretty, but that I wanted to be near them, and talk to them, and be like them. In my imagination, whenever I glanced at someone’s computer screen I was getting to see something top-secret and super-smart. I have no idea what any of them were working on, but the productivity of the room, the determination in the eyes of everyone there, and the sparks flying from their brains as they each worked on the Next Big Thing, was infectious.

Still, though, I felt like I was on a field trip. I was still on the outside looking in. Then Wes took us to our meeting room, a gorgeous glass box at the corner of the floor. That was when things felt real. I wasn’t going to watch a business meeting, I was going to be in a business meeting. I looked around at my team, curious if they felt this was as important a moment as I did. They were all very calm, and I was glad for it. Wes took a spot at the head of the table, and MassDiGI’s Monty Sharma sat next to him. In what was in my romanticized mind a coming-of-age moment, I sat on Wes’ other side.

The meeting was fantastic. Everyone on our team spoke, and we made a ton of progress. BrainFrame is a tricky project: it’s a gamified self-help tool for the iPad intended to exercise the executive functions, similar to Brain Age and Lumosity. The catch is that NeuroScouting was insistent that every game include user-uploaded photos, that way they could practice skills such as facial recognition, something other tools have difficulty tackling. As neat as that sounded, I was terrified that we simply weren’t going to make that concept work for us. I had no idea if we could make a product that fit their strict requirements that still fulfilled both the needs of the game and the needs of the science.

It’s taken a lot of iteration and compromise, but I think I can now say that the BrainFrame team has managed to produce something that meets those goals. We are ready to deliver this game to NeuroScouting so that they can analyze it’s scientific merit, and ready to show it to others as a game we can be proud of. And while I cannot speak for anyone else, I at least am a huge step closer to being an adult.