Holy wow. So it’s come down to this; the final week of development. In these harsh and trying times, the words of MassDiGI’s managing director, Monty Sharma, echo…

Wise words indeed, and as much as I knew it was coming, as much as I prepared myself and prepared each team, I still feel the pressure. Inevitably, there have been a multitude of last-minute requests to get some new sound effects in or provide a new mix on a track. On top of that, we’re trying to get trailers finished for each game ASAP. The pressure is on-like-Donkey Kong, but the good thing is, I don’t feel it alone. 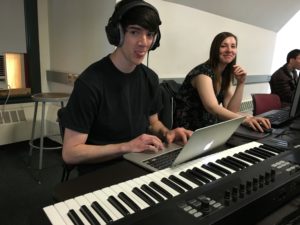 As the sole resident “audio guy” (aka “Lord of the Dance”), I have the unique perspective of being on all four SIP teams at once. I’m responsible for the bleeps, bloops, bangs, whooshes, and sweet jiggity jams that get put on these games. Approaching the eleventh hour of development, my experience has been a roller coaster ride that has fluctuated between the relaxing high points of being pleasantly surprised with the amount of work left, to the sudden fast-paced drops towards the low points of realization upon playing a build that there is much, much more to be done. It’s a vicious cycle. While this may have its stressful moments, it’s also comforting to know that no matter how far into production-beta-omega-post-polish-whatever phase, and no matter how much progress is left to be done, big or small, every team and every team member is pushing their hardest to get as close to a finished product as possible by the end of the week. Last Friday, we had the pleasure of getting feedback from some of the folks at Intrepid, Harmonix, Demiurge, and the Indie Game Collective. As exciting as it was to be able to get more professional feedback, it was radically stressful making a mental list of every recommendation that we wouldn’t have time to consider. What I can safely say from having one limb in each game is that we are all feeling that same pressure on one level or another, and beyond any anxiety, stress, or fear that it induces, there’s a gung ho attitude among the teams that makes me feel motivated to contribute everything I can to get the best product we can by the end of the week.

After all, we’ve worked our butts off, even on our bad days. We’ve pushed to promote games that, a month ago, some thought wouldn’t be worth promoting by now. And yet, we’ve had a blast. I’ve spent this summer doing exactly what had I hoped my career would become back when I was a hopeful high school student, plus more.

Thinking back to when these games started as mere conceptual seeds of serendipitous aspiration back in orientation week, I’m absolutely amazed with how far the teams have been able to come and how much work has been done to get from then to now. Looking at myself, I’m extremely proud with how I’ve grown this summer as a composer and sound designer. All of it is thanks to the people who have grown next to me. I’ve met some incredibly talented, friendly, unique people in the program. I have watched them revel and improve in in their respective skills. I’ve watched them break out of the shell they bore when I first met them. I have watched them learn from each other and I have learned immensely from them. I’ve seen all four teams go through rough patches, smooth patches, and just plain old collective confusion and despair. I have watched a poorly translated version of Star Wars with them.

Every one of us is walking away this summer with a fat new set of killer skills for paying bills, a whole bunch of new contacts, some great stories to tell, and some fantastic new friends. These people are paragons of a pastime made more than a hobby, and I can’t wait to see where video games will take us all in the coming years.