The mesa of misery

Game development, like many types of  projects, works in a progression of phases. You start off with nebulous concepts and ideas, you decide on one of them, you roll with it, you iterate upon it, and you get as many eyes on it as possible. Once you feel confident that you’ve picked a good idea, things start to feel much more tangible, more real, and sometimes more frightening. This is the stage we’ve recently entered at SIP17. Professionally, we’re in what’s known as the Template part of the Production phase (production being the last long trek to a completed product). Our manager Monty Sharma, however, likes to call this phase “The mesa of misery.” 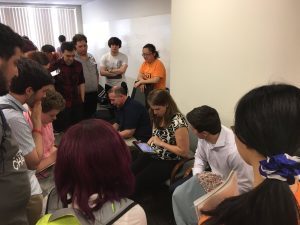 Demoing our games for the MassDiGI
Advisory Board in Boston

This term may be new (and somewhat frightening) for many people, but the meaning behind it is something with which anybody who has ever worked on a long-term project should be quite familiar. In those earlier stages of development, every new idea and change seemed like a revolutionary one. Our game was in its most malleable form, and it seemed like every miniscule thing we added had an explosive impact on the game. Not all of these additions were great, but it kept the project exciting, it was a learning experience, it felt fresh and interesting. Now, however, is when everything stagnates. Fewer and fewer new ideas come in. The game, at its very core, has been well established, and anything we put on it now is essentially window dressing (useful window dressing, but still, nothing ground-breaking). This isn’t to say that the rest of the work ahead of us isn’t important; we have a good base, now this is the time to flesh it out, to make it pretty and exciting to everyone else who’s going to experience it in its final form. However, while these changes may be important, they feel less and less impactful to us, the people who have been building this from scratch, with each new iteration.

This is why this part of production is “The mesa of misery.” It’s not that the project has suddenly become bad or unworthy of effort, it’s just become much less exciting to improve. This is the beginning of the slog, the part where every iteration feels less like a giant leap forward, and more like an inching crawl. Now every small change is just that, a small change, no more massive enhancements from the smallest improvements. And while this part of the project may not be as exciting or fast-paced as the earlier development was, that doesn’t mean it’s less rewarding. 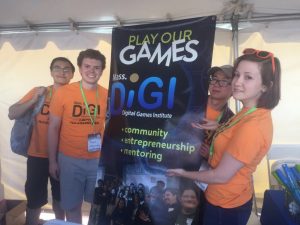 This part of production is incredibly important, not just because it’s when final production-worthy assets and code are created, but because it teaches us to stick with our work. In the earlier development phases, everything was exciting and fresh, but now the most important work is being done when without that same excitement. Does it feel like a drag sometimes? Definitely (don’t ask me how many cups of coffee I drink daily). But does it still feel good to get something new into the game that we know will ultimately help? Absolutely. This doesn’t just teach us how production phases work and when to start the finalized work on a project, it teaches us to stick with a project even after it’s stopped being new and exciting. It’s teaching us not to abandon a project just because it’s not as fresh anymore. It’s teaching us that every part of production is important, and great things can always be forged and accomplished, even in “The mesa of misery.”