One word to describe the 2014 MassDiGI Game Challenge would be “phenomenal.” That “phenomenal” feeling was experienced by about 20 Millbury Memorial Jr./Sr. High School students during their participation in this year’s Game Challenge competition. With limited game programming or design experience, all the Millbury students, including us, jumped into the Game Challenge with both feet.  In addition to fielding six different teams for the competition, the Wasteland Trials team from Millbury took home the first place trophy in the high school category. 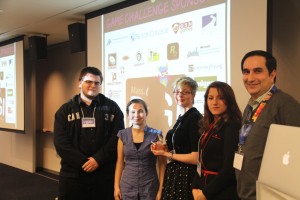 The impetus for the participation of Millbury students in the Game Challenge was created by a school visit from MassDiGI’s Monty Sharma.  After learning a bit about game designing and careers in the game design industry, the Millbury students enthusiastically took on the Game Challenge.  Millbury teacher Mark Sutphen allocated classrooms and set-up meetings that allowed students to gather and formulate ideas and join teams.  As an after-school activity, students were left to form groups on their own, usually dividing teams up into specific tasks. One student played the role of “Creative Director”, and another as the “Lead Sound Manager”.  Other students filled vital roles such as, level design, character artists, code-programmers and business manager.  These high school teams met weekly, every Wednesday, in Mr. Sutphen’s classroom. Additional time spent on the project had to be found outside of the school setting where meetings were run through social media, e-mail and social gatherings.

On the first day of the two-day competition, the Millbury students boarded a school bus headed down to the Microsoft New England Research and Development building, located near the campus of MIT in Cambridge.  Though initially somewhat intimidated by the surroundings, the students quickly adapted and fully participated in a fantastic fun-filled day. From the vendors, food and eventually the competition, the students thoroughly seemed to enjoy what the Game Challenge had to offer.

On day one, each group attended lectures from Monty Sharma, Jason Della Rocca and industry professionals who talked about how to improve game quality, how to market games more effectively, and how to make contacts in the gaming industry.  Feedback from professionals and peers was a key to the students’ learning experience. This feedback would then be used by the students to make final adjustments before the day two of the Game Challenge.

During downtime at the competition, students were able to test out some awesome games and game technology from several indie game companies who were displaying their latest design prototypes and ideas. A friendly atmosphere allowed the students to feel comfortable in hobnobbing with college students and professional designers. Students felt right at home exploring the playground known as floor one of the Microsoft N.E.R.D.

Win or lose, every student left the competition with a smile on their face and a full belly. It was obvious that MassDiGI spared no expense to provide a generous banquet of pizza, club sandwiches, salads and desserts. Soda and chips were laid out by the table, and a hot chocolate/coffee machine was left out for almost every Millbury student to indulge upon.

To top it all off, each and every student had the opportunity to learn something new. Not a barrage of dates from history but instead on a topic that draws the attention of teenagers with the same intensity as iron to a magnet: video game design. More importantly, the Game Challenge left students with a lesson on the marketplace – how to create a successful game in terms of generating revenue – making a profit!  While it can be seen as beautiful for designers to view their game as a work of art, it is no doubt also important that their game possesses relatable, feasible business concepts that allow for the prospect that the game will actually make it in the market.

As students of Millbury Jr./Sr. High school and Game Challenge competitors ourselves, we can say that Millbury High is already looking forward to competing in the next year’s Game Challenge.