To throw a cat: The making of a tutorial

At this point in development, with only two or so weeks to go, it’s almost impossible to take any more feedback from anyone, especially playtesters. We’ve fixated our scopes, finalized UI designs, solidified a large percentage of art assets…if you name it, we’ve probably had six design meetings about it. Just about the only thing still up in the air, at least for the Comet Cats team, is the tutorial. 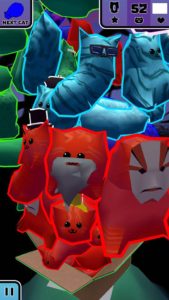 This is terrifying because a huge dropoff point for mobile players is the tutorial. How many times have you downloaded a new game, waited irritably for the credits and loading screens to clear, been presented with a bible’s worth of textual instructions, and promptly deleted the game? More than once, I imagine. Now, we could be lazy and use the excuse that contemporary attention spans are dropping like flies and it’s out of our control, or we could be realistic and admit that the quality in media has skyrocketed in the past 5 years alone. Players are used to levels of user consideration and respect on par with Apple and Nintendo in all of their preferred media, and if your game doesn’t meet those standards, players will find another game out of the 800-something launched weekly that will.

So taking that into account, it’s been worrying that our team has struggled to teach people how to play our weird little game from day one. Once they get the hang of it, most folks seem to enjoy it, but we always have to explain how it works first. People don’t often figure it out on their own. Which is not their fault.

“Our tutorial shall fix this,” we said.

The major blocker keeping us from putting one in the game to test immediately was that we were told not to do so. Instead, we were strongly suggested to come up with a series of paper tutorials. These are written instructions (sometimes with pictures) on slips of paper that you physically hand people while they play your game.

Testers would be handed an instruction in thick-tip black sharpie reading “Tap the screen to throw a cat” and then instantly ask us what to do. This was preposterous to our team, who had been staring at cats flying through the air for weeks. As if procuring a cat from one’s fingertips would never follow as a logical thought after reading the horrendously unclear and garbled jargon “TAP THE SCREEN TO THROW A CAT.” I didn’t understand how we could have done better. I always ended up verbally explaining how the game worked out of sheer annoyance and ruining the testing session (my bad, guys). This is because when we break down our pretty simple game, there are quite a few concepts that a player must intuit to fully understand the experience:

That’s a lot of stuff.

When Pokemon GO came out this month, our scrupulous mentor Walt Yarbrough immediately leapt into action, pointing out how brilliant it was that the lack of straightforward tutorial in the game made people talk to each other and forced them to build a community. In response to this, jokingly, one of my teammates suggested this week, “Let’s just not include a tutorial and say that it ‘builds community.’” Frankly, it’s starting to sound like a pretty sweet option.

In all seriousness though, like P.J. Keenan said in his blog entry, the important thing seems to be keeping a level head and putting one Kanban sticky note in front of the other. Keep going at the pace you’ve been going and trust your team that Everything Will Be Okay. Our head programmer Ben Page has started assembling a tutorial in-engine – simple textless things like a pulsing icon in the center of the screen that you need to tap (TO THROW A CAT) in order to advance – and that’s started to make me, for one, feel a lot better.

No matter what kind of tutorial you make, it’ll work for some folks and anger others beyond redemption. When you were a kid were you someone that mashed A and skipped even the cleverest form of instruction? Did you stare at the screen, terrified to explore any controls on your own without textual prompting? We can’t control how people like to play games. It’s taken me this long to realize that. It’s also taken me this long to see that it’s not our fault, either. Some people just won’t get our game when it’s done and launched. That’s okay, because it is statistically impossible that our tutorial won’t work for some people. The rest can figure it out from “the community.”