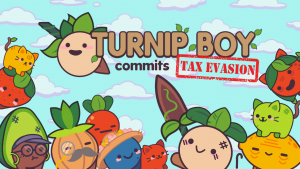 Turnip Boy Commits Tax Evasion is an adventure game where you play as an adorable turnip who just so happens to be an absolute menace to society. The game was created by designer/programmer/artist Yukon Wainczak along with designer/artist Jennifer Kindl, marketer Jordan Kegler – all of whom met while students at Becker College – with music from Flowerblvck.

“All our hopes for Turnip Boy were realized when we won the Game Challenge,” said Wainczak. “If you have a passion for making games then this is a required event. You learn so much from all the other competitors and the judges, too.” 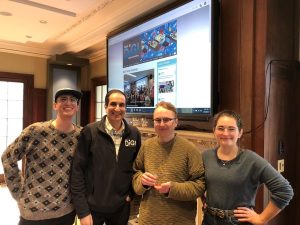 “The feedback we received at the Game Challenge was amazing,” said Kindl. “We have a much better idea of the direction we need to go to produce the game we want to make and how to make it successful.”

The MassDiGI Game Challenge helps indie and student game developers and entrepreneurs sharpen their business focus and shape their ideas and products for launch. This year 22 teams from across the New England registered to compete in front of a crowded house at the Colleen C. Barrett Center for Global Innovation and Entrepreneurship on the campus of Becker College in Worcester.

Other winners included Mazu which took the top prize in the Indie Category. The game, a hack ‘n slash bullet hell inspired by Asian folklore that lets players explore a fresh and vibrant world and fight mythic monsters, was created by Greater Boston-based Oxhead Studios.

Since the MassDiGI Game Challenge began, over 300 different teams from around northeast and beyond have pitched games and taken home prizes valued at over $100,000. Top past winners include titles such as Feral Frontier, Salad Hunt, PWN, Catlateral Damage, Depression Quest and Starlot Derby.

As the Grand Prize, People’s Choice Award and a College & University Group Category winner, the Turnip Boy team won cash and other prizes valued at more than $2,500.

“This year’s contest was as competitive as I’ve seen,” said Monty Sharma, managing director of MassDiGI, “Each and every team was really impressive and the creativity and skills on display improves every year as do the games.”

The other College & University Group Category winners were Shattered Journal Games from Becker with Last Slice, a brawler where there’s one slice of pizza left so you have to fight for it with whatever you can find, but the longer you play, the weirder it gets and Geometrick Games from Becker with Grayland, a stress-free platformer where the player must bring color back into the world.

-The Call of Karen by Trumbus – Category Runner-up – tie – WPI