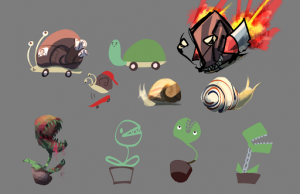 When a designer identifies the core feeling that the game wants to give to the player, it is important to consider that all game elements serve to deliver that feeling. One of the most intuitive feeling games reveal to players is first and foremost visual. A game must have its unique artistic elements in it in order to bring players psychological satisfaction, such as the connection between art style and UI design in casual games, they tend to be cartoony with bright saturated colors. So, the elements of a well-integrated game need to match. These elements need to be matched between art styles such as color and texture and designs such as cartoon or realism to create a sense of harmony. However, the artist’s resources need to be abundant, both in quantity and quality in order to achieve this harmony. So, the bulk of our pre-planning stage uses mood boards to help us before we actually design.

Mood board is the key tool for improving and evolving our ideas throughout the design process. The benefits are obvious: it improves team members’ efficiency and guides a cohesive art generation process.

We began our journey by brainstorming potential game concepts. We created mind maps which generated two concepts we felt had potential.

After establishing the concepts to move forward with, we began the mood board phase. 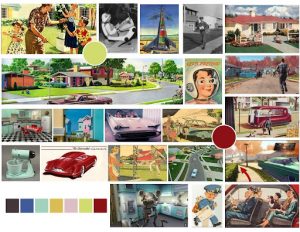 Because the feeling we brought to the player in this game was first and foremost crazy and fantastical, we chose a lot of products from the retro-future, such as retro nuclear-powered cars and community scenes. Because our game wants to provide a relaxed and lively palette. 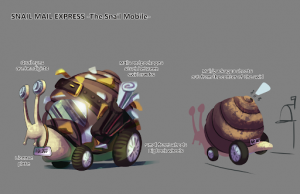 We choose a lot of high-brightness and low saturation colors on our color palettes. In this way, we hope to bring players a relaxed and joyful experience of the game.

We established “Venus Flytrap” to be quirkier and more earth toned. The game’s design focuses on the jungle environment. So, for the mood boards, we tended to look for elements from nature, and we got a lot of pictures for our reference, including dark forests, exotic Venus flytraps, insects, and some carnivores. 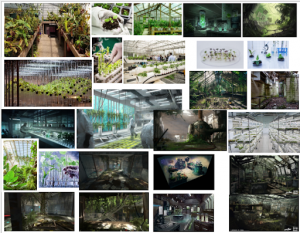 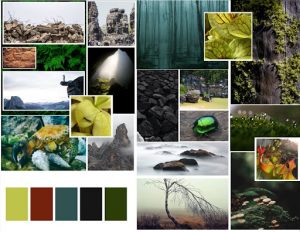 Both “Snail Mail” and “Venus Flytrap” games were beginning to shape themselves into more concrete ideas we could present to other teams but our team was more eager to focus on the “Venus Flytrap” idea as we were able to find more reference pictures, ideas, and motivation from the team as we progressed.

From the elements of these pictures, we extract new color palettes, most of them are green and blue palettes with high grayscale. After that, we redesign all the elements to fit the overall game environment. 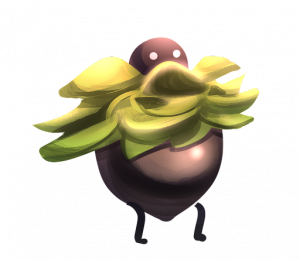 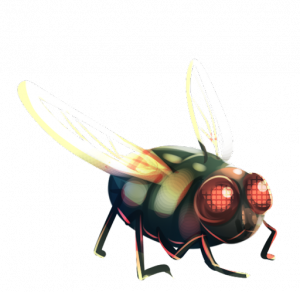 After that, our game gradually began to have a storyline, and according to us, the player character was a fly trap escaping from the lab and constantly needing to get food in order to survive. So, we started looking for pictures of abandoned greenhouses and laboratories to meet our design needs. 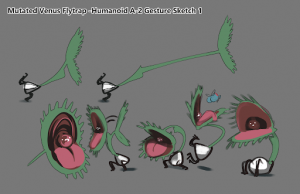 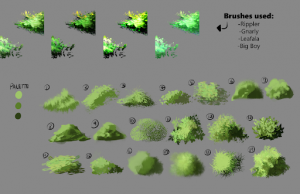 To make our design more believable, we took a lot of different species of Venus flytraps and designed them to be enemies in the game. For example, we liked a Venus flytrap of Cobra Lily and thought it looked like a boa constrictor that could swallow the main character. This design not only meets the overall environmental needs of our game but also improves the sense of harmony between game elements. 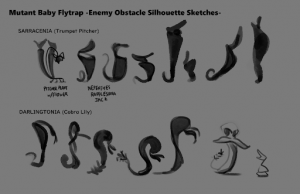 As we are moving forward to more environment and enemy resource research, more enemies that tend to affect the game mechanism are created. 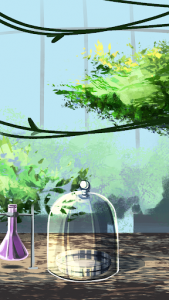 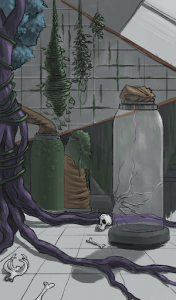 The moss from the mood board inspired our team’s game designer of a “platform murderer”, which can kill the player’s character. In addition, we have many new designs to add to the game, all inspired by mood board. 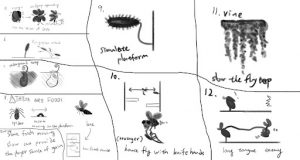 To sum up, mood boards are the integration of our inspiration sources, and their establishment lays the foundation for our entire project. From the beginning to the middle of the game, we’re constantly adding new elements. In the browsing, constantly exercise our design thinking; Change, add, or remove elements of the game to nurture and grow into a mature product.