Not all ideas are great. Or perhaps, not all ideas work in a game setting. The process of coming up with a game to create can take many steps. Our team (named Curry) took multiple brainstorming sessions, prototype game builds, and a complete reset of our game.

Let me start at the beginning. For our brainstorming phase, each member came up with a few game ideas (about 3 each) that somehow could be related to a mobile game already on the market. Then we went over each of the ideas and decided which ones we enjoyed as well as which ones could be related to a popular published game with a similar mechanic. With this narrowed list, we then voted on a top 3 and fleshed them out more: researching various games and what made people want to download them. We then did the whole process a second time, having a total of 6 games to narrow down.

We were left with 3 possible games:

The first game idea seemed to work the best for us, so we went ahead and started making an actual game. We had a problem, though, XP3 required us to make two test games of various mechanics. 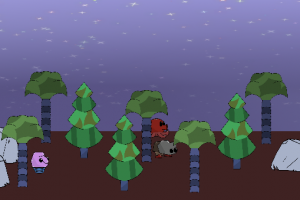 Being so attached to the cryptid idea, we branched other gameplay off of that, so instead of just taking photos, the player would capture creatures to add to their zoo, which slowly earned them money. This turned the quick-tapping shooter game into more of an idle property management game.

After making both test builds, we realized that we had a tendency to over complicate things. None of us being too familiar with the mobile market beforehand, we were used to the complexity that came with console and PC gaming, whereas mobile player look for something easily digestible in a matter of minutes. Long story short, the complex idle/creature capturing game was canned, even though art and audio was made alongside it. Still favoring some kind of photo mechanic in our game, we leaned into the idea of the player as a bird watcher, where all they had to do was take photos of birds. While the thought was simple and the photo taking was mildly interesting, there was no gameplay substance to it. The player wasn’t encouraged to have a purpose.

After mulling it over, we decided to take the camera mechanic away as the main focus and put it on attracting birds (specifically for us, owls) to stop by and give you currency as they leave so you can buy more things that could attract more rare owls. It was during working on this new gameplay loop that we got rid of the cryptid idea. Just tapping on cryptids made the gameplay a little too easy, and the theme wasn’t popular on mobile, so it would have been a difficult game for players to catch on to.

So, production began on the owl collecting game. For the whole gameplay loop to function correctly we had to create a shop, inventory, a photo album, and a camera. We also had to create a lot of art and audio assets so it was both visually pleasing and made sense to the player. When designing the game, we tried to mimic what made other creature collecting (most famously Neko Atsume, the cat collecting game) interesting, and improve upon other parts, that included the layout of the menus. Within a week or so, we got a working game build up and running, aside from some minor glitches that came with the input differences on mobile and PC.

The results… It flopped… Terribly. Visually, it was good. Audio was pleasant and added solid feedback. Programming-wise it did what it was made to do. But unfortunately there was no game. Players didn’t quite understand what to do. Why did they need to attract owls? Where was the fun? Okay, I can put a hat on an owl and take a photo of them dancing, but what happens now? When testing the game, we decided not to add instructions, just to see if players would understand the game. Obviously that didn’t work out too well. It was difficult with our small test build to show players how we wanted them to play the game, and how the game could be enjoyable. With all the negative feedback and glaring design problems, we stepped back for a second. Should we keep working on this? It took a lot of assets just to get a small test build working, and it’s going to  take exponentially more to get a full game out the door. No, we weren’t victims of the sunk cost fallacy, we dropped production on the game.

Where to next? We could go back into the brainstorming phase, but it’s over halfway through the internship and we need to have a rough draft on marketing materials done by… next week. We needed a game that was both easy to develop and didn’t require the production of a lot of assets (and something that people understood how to play). We looked out our previous brainstorm at the beginning of the internship and saw the bomb matching game. Matching was easy to understand, and all we had to do was create a single bomb icon and recolor it to make plentiful assets on a whim.

Woah, woah—bombs? That’s the theme we want? What about some other ideas? Hats on raccoons? Too many assets. Mad-lib style word matching? Penguins with snow cones? Now hold on a second—that just might work. It’d be simple to create, need minimal assets that we can change programmatically, and the theme is fun and understandable enough so it won’t need a tutorial. With the idea in place, we set to work…and made the prototype in a day. With the mechanics set, we’re now in the process of importing art assets, audio, and a little of that design magic we call “juice” (mainly, particle effects and user interface animations). With production going a lot quicker and more smoothly, we’re hoping that any future flops are merely penguin related.